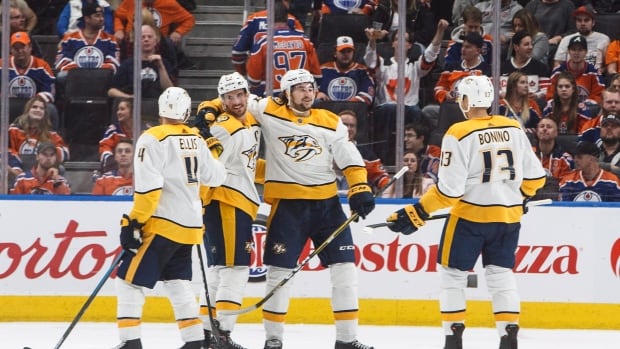 Juuse Saros and the Nashville Predators found a way to shut down Connor McDavid and the Edmonton Oilers.

Saros made 31 saves in the shutout and the Predators ran their winning streak to five games with a 3-0 victory over the Oilers on Saturday night.

“We knew before the game they had lots of talent so we had to be solid in the defensive zone,” said Saros, who is unbeaten in four game this season and got the call with Pekke Rinne out with an injury. “I think we were that today and our penalty kill was really great, too.”

P.K. Subban, Viktor Arvidsson and Roman Josi scored for the Predators, who are a perfect 4-0-0 on the road and have won seven of eight games this season. Mattias Ekholm had a pair of assists.

Watch highlights from the Preds’ 3-0 win:

P.K. Subban’s short-handed goal proved to be the game winner as the Nashville Predators shut out the Edmonton Oilers 3-0 on Saturday night on the road. 0:43

“People talk about our ability to jump in the rush and generate offence, but we take pride in trying to make it as easy as we can on our goaltenders,” Subban said. “It’s tough to play against us when we’re moving our feet getting back to pucks.”

The Oilers had a three-game winning streak halted.

“I don’t think we were as sharp as the last few games before,” said Oilers forward Leon Draisaitl. “We were clicking and created a lot more chances than we did today. We are still a work in progress. We need to create a little more than we did tonight.”

There was no scoring in the first period, with Nashville getting seven shots on Oilers starter Cam Talbot and Edmonton putting four on Saros.

Nashville broke the deadlock with 6:46 remaining in the second on a short-handed goal. Subban broke up ice on a 2-on-1 after an Edmonton giveaway and took the shot himself, scoring his second of the season.

The Predators made it 2-0 about 90 seconds later after a nice passing play set up Arvidsson, who slipped a wrist shot past Talbot.

Josi put the game away in the final minute with an empty-net goal.

Nashville head coach Peter Laviolette did the entire postgame interview while wearing a full bull mask, something he had promised his team he would do if the Preds swept both of their games against Alberta teams over the last couple days.

“It was going to be a tough trip, so we threw it out to the players and they got to choose the back end of the challenge, so we’re honoring the deal,” he said.

“Good on him to hold up his end of the bet,” Subban chuckled.