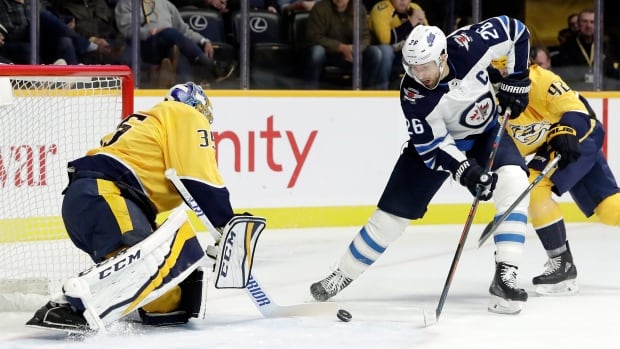 Pekka Rinne made 29 saves to lead the Nashville Predators to a 3-0 victory over the Winnipeg Jets on Thursday night.

The shutout was the 52nd of Rinne’s career. Ryan Hartman had a goal and an assist and Roman Josi and Ryan Johansen also scored for Nashville, which improved its record on the young season to 3-1-0.

The Central Division’s top two teams from a season ago met for the first time since the Jets ousted the then defending Western Conference champion Predators in a tough seven-game series in the second round of the playoffs.

Hartman scored the game’s first goal at 3:02 of the second period.

With the puck just inside the Nashville blue line, Jets defenceman Ben Chiarot sent an ill-advised cross-ice pass toward partner Dustin Byfuglien. Hartman stepped in front of the pass in stride and headed the other way. With a step on Byfuglien, Hartman shielded the big defenceman with his hip and beat Hellebuyck with a backhand on the stick side for the unassisted goal.

Rinne’s best saves came with the Predators shorthanded. The first was at 14:17 of the second when he denied an Adam Lowry attempt from the low slot, one of just two shots the Jets put on Rinne in the middle frame. Late in the third, Rinne turned aside a Blake Wheeler shot on a breakaway.

Josi doubled the Predators lead at 7:58 of the third with a slap shot from the high slot. It was the first goal of the season for Nashville’s captain.

Johansen scored at 14:42 of the third with a nifty backhand tucked just underneath the crossbar from just outside the crease.

The Predators have yet to score a power-play goal this season, going a combined 0-15 through four games.