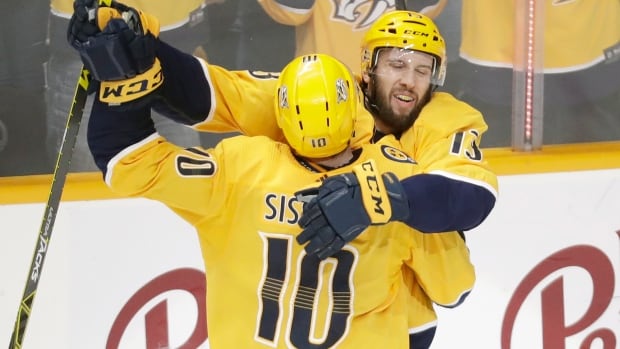 Ryan Johansen’s goal with 20.4 seconds left in regulation lifted the Nashville Predators to a comeback, 3-2 home-ice victory over the Vancouver Canucks on Thursday night.

The Predators (46-29-6, 98 points) improved their hopes of finishing first or second in the Central Division and securing home-ice advantage in the opening round of the playoffs. The Canucks (35-36-10, 80 points) took their first loss in four games.

Johansen put in a pass from Filip Forsberg after a couple of Canucks turnovers in their own end. The goal capped Nashville’s rally from a 2-0 first-period deficit. The officials reviewed the play for a possible offside call, but the goal stood.

Nick Bonino had a goal and an assist for the Predators, while Colton Sissons also scored, and Austin Watson furnished two assists.

Granlund gave the Canucks a 1-0 lead on a power play 8:49 into the game as he took Hughes’ pass from the side boards, skated in front of Rinne and beat him with a backhand. The goal was Granlund’s second regulation-time tally in two games. He also netted the shootout winner a game earlier, against Dallas on March 30.

With 12 seconds left in the first period, Pearson padded Vancouver’s lead during another man-advantage situation, firing in a Hughes rebound. Pearson’s shot hit the crossbar and then bounced into the net off the back of Rinne’s mask.

The goal was Pearson’s fourth regulation-time marker in five games. He also scored a shootout winner in that span, against Los Angeles on March 28.

Sissons narrowed Vancouver’s lead just 37 seconds into the middle frame when his shot trickled through Markstrom as a referee’s whistle was sounding. A video review determined that the goal stood.

Bonino, a former Canuck, drew the Predators even on another controversial goal with 4:20 left in the third period. He put in a rebound as Watson fell and slid into Markstrom.

Canucks coach Travis Green challenged the goal on grounds of goaltender interference, but the goal was allowed to stand after a video review.