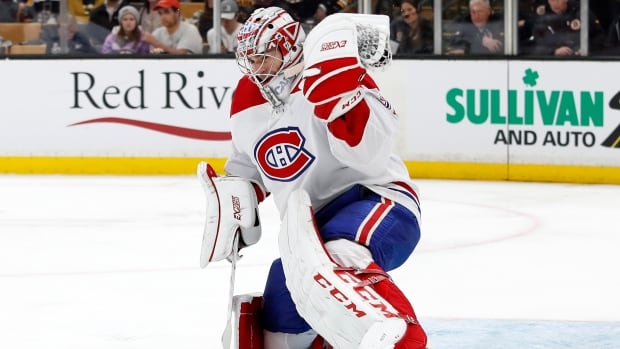 Carey Price knew he had a lot of help in front of him and was more than willing to credit them.

Price stopped 33 shots for his first shutout of the season, collecting his 290th career win with Montreal to move into second place in team history in the Canadiens’ 3-0 win over the Boston Bruins on Saturday night.

“Shutouts should be a team stat, really,” he said. “Everybody did an excellent job on defence tonight.”

Price moved ahead of Hall of Famer Patrick Roy and is now only behind Jacques Plante — another Hall of Famer — who collected 314 victories with the Canadiens.

Brendan Gallagher and Max Domi scored 1:21 apart midway into the first period and Price took over from there.

“We did what we had to do in the third period to protect the lead and get the win,” said Canadiens coach Claude Julien, who coached Boston’s 2011 Stanley Cup-winning team.

The Canadiens snapped a six-game losing streak against the Bruins, with the last victory coming at home on November 8, 2016. It was Price’s 41st career shutout.

“It’s always nice to get that,” he said of the shutout. “A little bit of icing on the cake.”

The Bruins lost for the first time at home this season after winning their first four – all in regulation. They were the last NHL team to lose at home. Tuukka Rask made 20 saves.

Gallagher gave the Canadiens a 1-0 lead 9:18 into the game when he beat Rask on a tough-angle shot. The winger fired a wrister from the right circle that slipped into the net between Rask’s left arm and the post.

During a delayed penalty, Domi’s hustle led to his goal that made it 2-0 at 10:39. Artturi Lehkonen was hooked breaking in alone and the puck slid behind the net where it collected it and sent it out front. Domi charged in, got the puck and shifted Rask out of position before firing it into the net under the cross bar.

The game lacked any real intensity in the first meeting of the season between the longtime rivals; mainly because Montreal dominated defensively, limiting Boston’s chances with tight defence.

“There’s a lot of things that we didn’t do,” Boston’s Patrice Bergeron said. “Obviously, he’s a great goalie, but I don’t think his job was very hard tonight.”

The Bruins pulled Rask with just under three minutes to play for an extra skater, and even that didn’t get them any good scoring chances before Jordie Benn banked home any empty-netter with 29 seconds left.

Boston’s Ryan Donato had a goal waved off early in the second period after a coach’s challenge. The play was ruled offside after a replay review.

Boston’s lack of offensive punch in the opening two periods did very little to excite the sold-out crowd. Even a video showing Red Sox highlights only brought loud cheers for a few seconds.

“They have a lot of smaller forwards who are able to get in on the forecheck and force teams to make plays they don’t want to,” Boston defenceman Matt Grzelcyk said. “They did that to us pretty well tonight.”

Montreal’s defence did a good job of giving up most of the shots from far outside where Price was able to handle them easily. The Bruins’ best bid came in the closing seconds of second period when Price made a splendid glove save on Joakim Nordtsrom’s wrist shot.