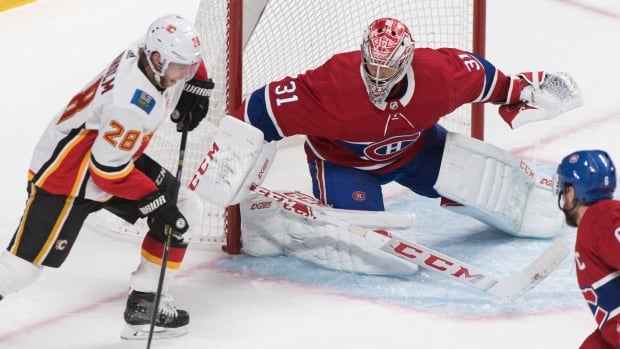 Carey Price made 31 saves for his second shutout of the season and the Montreal Canadiens snapped the Calgary Flames’ five-game winning streak with a 2-0 victory on Monday night.

Jordan Weal and rookie Ryan Poehling scored for the Canadiens (20-20-7), who have won two games in a row since losing eight straight.

Price’s shutout was the 46th of his career, tying Ken Dryden for third most shutouts in franchise history.

Goaltender David Rittich stopped 35 shots for the Flames (25-18-5), who have been shut out six times this season.

The Canadiens came out firing to start the game, forcing Rittich to make some big saves in the opening minutes.

The pressure kept coming and shots were 13-2 when Montreal finally put a puck past the Flames goaltender at 13:30. Following a wraparound attempt from Jeff Petry, Weal spun and placed a no-look shot under Rittich’s pad.

Weal was back in the lineup after being a healthy scratch in Montreal’s 2-1 overtime victory in Ottawa on Saturday, a win that snapped their eight-game skid.

Price was not very busy through two periods but he made important stops when called upon.

He denied Matthew Tkachuk and Andrew Mangiapane on 2-on-1 rushes in the second. Price also made a pad save on Tobias Rieder’s backhand midway through the frame before denying Johnny Gaudreau’s wrist shot with the glove a few minutes later.

Poehling gave Montreal a two-goal cushion with his first point in 20 games this season. After a Canadiens face-off win in the offensive zone, the 21-year-old rookie drove to the net and waited for Rittich to go down before firing the puck over his pad at 9:45 of the third.

Calgary pulled Rittich for the extra skater with nearly four minutes to play but they could not solve Price, who improved to 8-1-1 in his last 10 games against the Flames.

The Canadiens have beaten Calgary in five straight contests.

Montreal’s Brendan Gallagher missed his second straight game with headaches following a concussion. Defenceman Ben Chiarot was back after missing two games with a lower-body injury.