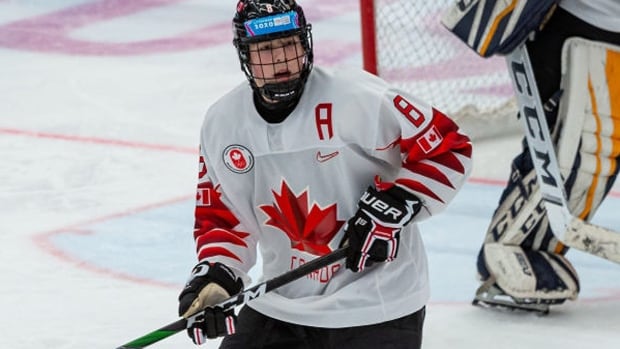 The Gatineau Olympiques changed the look of their team on Friday night in under an hour.

The Olympiques opened the 2020 Quebec Major Junior Hockey League entry draft by selecting Tristan Luneau No. 1 — with the Trois-Rivieres Estacades defenceman being the first of four Gatineau picks in the top eight.

Gatineau entered the draft with picks No. 1, 2 and 4 before adding No. 8 in a trade with the Moncton Wildcats shortly after the draft began.

Gatineau director of operations Louis Robitaille rounded out his big draft night by choosing defenceman Noah Warren of the College Charles-Lemoyne Riverains at No. 8.

This year’s draft is being held virtually on the league’s YouTube channel due to the COVID-19 outbreak. Round 1 went Friday, with Rounds 2 through 14 going Saturday.

Luneau, six-foot-one 182 pounds, was considered by scouts as the top prospect ahead of the draft. He produced six goals and 30 points in 37 games while captaining Trois-Rivieres in the 2019-20 Quebec midget triple-A season.

The right-handed blue-liner wears No. 8 and models his game after L.A. Kings star Drew Doughty.

Moncton director of operations Ritchie Thibeau didn’t hold a pick until the third round, No. 41, after moving his first- and second-round picks in January, but pulled off back-to-back trades to slide up.

The rebuilding Wildcats, who had their Memorial Cup dreams crushed when the season was cancelled in March due to the pandemic, then sent the eighth overall pick to Gatineau for the 13th and 23rd picks in 2020 and a third-rounder in 2022.

Various trades and mediocre results on the ice in recent years landed the Olympiques three of the first four picks in the draft.

The top pick was originally acquired from the Mooseheads in a December 2018 trade, while the second selection was obtained in a December 2017 deal with the Acadie-Bathurst Titan. Both squads gave up their future top picks for Memorial Cup runs.

The Olympiques were sitting last in the Western Conference with a 22-37-5 record and guaranteed to miss the playoffs when the QMJHL season was stopped.