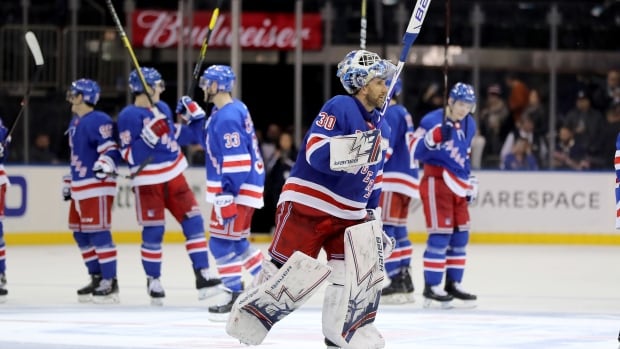 Henrik Lundqvist stopped 25 shots to lead the surging New York Rangers to a 2-1 victory over the Vancouver Canucks on Monday night.
Filip Chytil and Brett Howden scored to help Lundqvist get his 437th career win, tying Jacque Plante for seventh place on the NHL’s all-time list. The Rangers improved to 6-0-1 in the last seven.

Lundqvist made two big saves on Vancouver’s rookie sensation Elias Pettersson in the closing seconds to preserve the win.

Nikolay Goldobin scored and Jacob Markstrom made 25 saves for the Canucks, who snapped a six-game point streak (4-0-2).

The 19-year-old Chytil tied the score 1-1 with 7:18 left in the second on a rebound from the left side for his first of the season. After earning a spot on the roster out of training camp, he struggled to find the back of the net in the first 18 games. Rangers coach David Quinn said earlier in the day he had not lost faith in the talented teenager and was rewarded for his patience. Chris Kreider and Neal Pionk assisted on the play.

The 20-yearHowden got the game-winner with 8:41 left in the third when he snapped a wrist shot past Markstrom. Jimmy Vesey and Jesper Fast assisted on the play. Howden missed one game earlier in November for precautionary reasons after a scary collision with the end boards against Buffalo.

Goldobin gave the Canucks a 1-0 lead at 3:16 of the second. Shortly after exiting the penalty box, Goldobin picked up a loose puck in the neutral zone and started an odd-man rush for Vancouver. The Russian winger kept it himself and wired a wrister into the top corner. Tyler Motte and Ben Hutton assisted on the play.

The Canucks thought they doubled their advantage less than a minute later when Michael Del Zotto’s shot hit both posts and the cross bar. The referees initially called the play a good goal on the ice but it was later overturned after a video review.