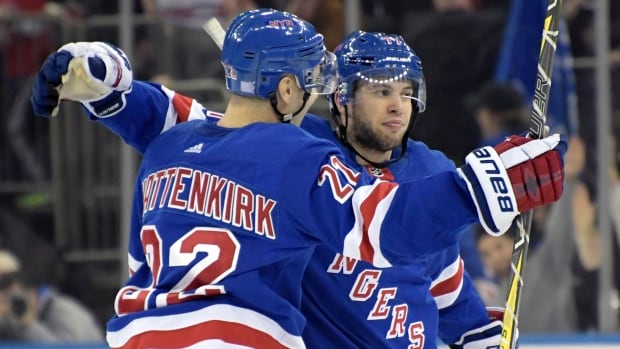 Neal Pionk scored the tiebreaking goal on a sensational, end-to-end rush late in the third period and the New York Rangers rallied to beat the Montreal Canadiens 5-3 on Tuesday night for their fourth straight win.

Mika Zibanejad and Chris Kreider each had a goal and an assist, Tony DeAngelo and Pavel Buchnevich also scored, and Kevin Hayes had three assists for the Rangers. Henrik Lundqvist made 31 saves.

New York trailed 3-1 early in the second period before scoring the last four goals — three in the third.

On the go-ahead goal, Pionk brought the puck from behind the Rangers net, spun around one Montreal player, skated up the left side, cut in toward the front of the Canadiens net and put it past goalie Carey Price while falling to the ice with 2:44 left.

Zibanejad capped the scoring after he brought the puck up the left side and tried to send a pass across in front. The puck defected back to him off Jeff Petry’s skate and Zibanejad put it past Price with 1:48 to go.

Tomas Tatar had two goals and Max Domi also scored for Montreal, which was 7-3-1 in its last 11 games. Brendan Gallagher and Petry each had two assists, and Price stopped 27 shots.