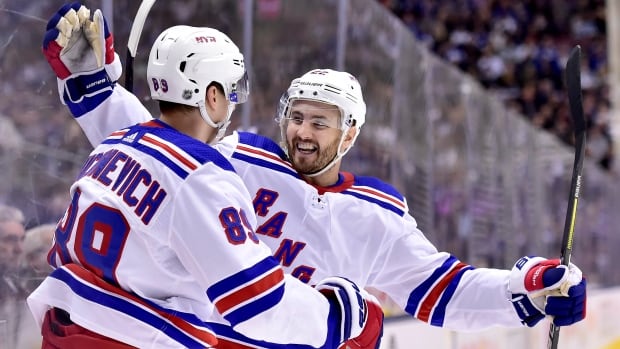 Ryan Strome scored in overtime as the New York Rangers snapped a five-game losing streak with a 2-1 victory over Toronto on Saturday.

Frederik Andersen had just made an amazing save on Boo Nieves on a two-on-one but the puck went to Strome who stuffed it in at 1:48.

With another stellar performance in goal until finally beaten in the third period, New York’s Alexandar Georgiev looked to have continued his mastery over the Maple Leafs.

Trailing 1-0, the Leafs finally beat Georgiev at 8:33 of the third after a rush by Morgan Rielly opened up the Rangers defence and John Tavares fed Hyman for his 19th of the season into a wide-open net. It was Toronto’s 33rd shot on the night.

Pavel Buchnevich had ended a scoreless deadlock 19 seconds into the third, beating Hyman to the puck in a mass of bodies in front of Andersen after a Brady Skjei shot from a bad angle produced a fat rebound. It was Buchnevich’s 18th goal of the season.

Tavares was hurt later in the third, sent flying by a Marc Staal cross-check in front of goal. The star centre skated off slowly, hunched in pain after finally being helped to his feet. Staal was penalized on the play. Tavares returned for the power play, almost scoring.

Georgiev, a second-year Bulgarian-born goalie, had a career-high 55 saves — second-most in a regular-season game in Rangers history — in a 4-1 win over the visiting Leafs on Feb. 10 (his 23rd birthday). That included 25 power-play shots.

Mike Richter made 59 stops in an overtime tie against the Vancouver Canucks in 1991. But the 55 saves were a Madison Square Garden record by a Ranger goaltender (in just his 12th start there).

Toronto was coming off a 4-2 win Wednesday in Buffalo but had lost five of its last eight (3-4-1). The Leafs had given up the opening goal in their last six games (2-4-0).

Already eliminated from playoff contention, the Rangers had lost five straight and 11 of their last 12 (1-6-5). They had also suffered three straight road defeats.

Georgiev came into Saturday’s game with a 3.11 goals-against average and a .905 save percentage in 27 appearances this season.

He had stopped 86 of 91 shots in his two previous career appearances against the Maple Leafs.