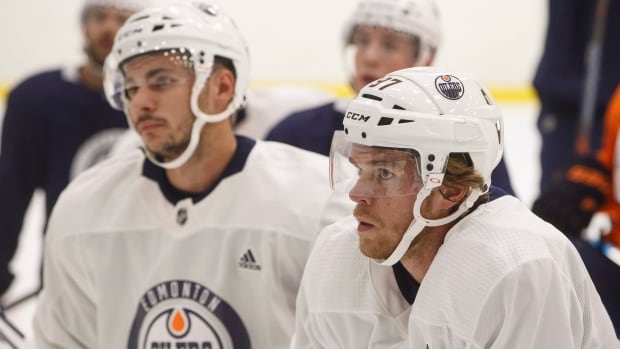 Ty Rattie and Jesse Puljujarvi are stepping up at training camp for the Edmonton Oilers, a team that has wide open competition at the right wing spot and needs to shore it up to rise in the standings this season.

The journeyman Rattie scored twice in a pre-season game Tuesday against Vancouver, and is slotted in to start the season on the top line with Connor McDavid and Ryan Nugent-Hopkins.

Puljujarvi also dominated against Vancouver, scoring one goal along with five shots on net and is playing with a confidence that has been lacking to date for the team’s top pick from 2016.

He is playing and excelling on a line with centre Ryan Strome and Jujhar Khaira, and at age 20 appears poised for a breakout season.

“I had a good summer, four months, good workouts and I think that’s helped a lot,” Puljujarvi told reporters Wednesday after practice at Rogers Place.

“He’s older, he’s more comfortable, he understands the language. He’s gone from a boy to a man,” said McLellan.

“He works well with (Khaira and Strome). We saw that last night. That’s really important, (to) make sure he gets off to a comfortable start. And he always works hard. He’s a great kid. He’s going to give you everything he has.”

The Oilers are looking to solidify the right side and end the merry-go-round on McDavid’s right wing. McLellan has already called the right wingers into a meeting in camp to stress that there are jobs to be won.

“The message got through to that group. When you look at the right wing position and some of the players that have performed over the last few games, there’s very healthy competition there right now for limited spots,” said McLellan.

Rattie excelled on a line with McDavid and Nugent-Hopkins late last season. But the 25-year-old, who has spent more time on the farm than in the NHL, said he skated twice as often in workouts this summer, knowing that this might be his last chance to stick in the NHL.

“There’s no secret there’s a couple of openings on that right side,” said Rattie.

He said he has already moved on from this two-goal performance in Vancouver.

“Obviously you want that confidence. At the same time you don’t make the team off one game.”

McLellan said Rattie has improved on the little things and on the intangibles.

“The ability to create offence is one thing, but I thought his board-work (in Vancouver) was real strong. He had an intensity to his game that wasn’t there last year at this time and that’s a real exciting thing for him and for us,” he said.

The Oilers are also looking for a bounce-back year from starting goaltender Cam Talbot, who looked sharp in Vancouver. Talbot stopped 22-of-23 shots, diving across the crease to rob Nikolay Goldobin of a sure doorstep one-timer goal.

“It was just pure desperation, pure luck. You just kind of throw your glove out there and hope he kind of hits it,” said Talbot.

“Hate to use those (saves) up in pre-season. Hopefully I’ve got a few more in me.”