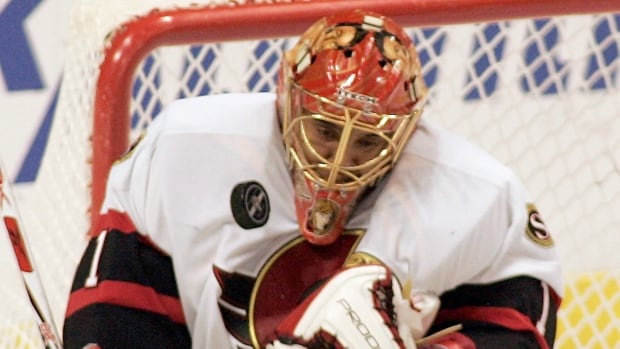 Former teammates, coaches and executives who played and worked with former NHL goaltender Ray Emery have been expressing condolences online following the 35-year-old’s death on Sunday.

Hamilton police say Emery drowned in Lake Ontario, adding that his death does not appear to be suspicious, calling it a “case of misadventure.”

Nicknamed “Razor” for his aggressive style, Emery played parts of 11 seasons with the Ottawa Senators, Philadelphia Flyers, Chicago Blackhawks and Anaheim Ducks from 2003-2015. He helped the Senators reach the Stanley Cup Final in 2007 and won it as a backup with the Blackhawks in 2013.

He and fellow Blackhawks netminder Corey Crawford combined to win the William Jennings Trophy for allowing the league’s fewest goals during the lockout-shortened 2013 season and finished seventh in Vezina Trophy voting.

“On behalf of the Ottawa Senators, I wish to express my sincere condolences on the passing of Ray Emery,” Senators owner Eugene Melnyk wrote in a statement. “Ray was instrumental in our run to the 2007 Stanley Cup Final, and at his best he brought a competitive edge and combative mentality to the game.

“On behalf of our entire organization, I wish to extend my deepest sympathies to Ray’s family, friends and loved ones.”

Condolences poured out from the hockey community on Sunday after word of Emery’s death spread.

Former teammates lauded Emery’s mentorship and leadership, especially in his final professional season in the AHL in 2015-16. Enforcer-turned-analyst Paul Bissonnette, a teammate with the AHL’s Ontario Reign, said Emery would treat other players to dinner almost every night.

“I’d heard nothing but great things before meeting him and it was true,” Bissonnette said. “He was awesome. Great in the locker room and just made life enjoyable.”

Ray was a great teammate and an even better friend. Rest in peace Razor. I’ll miss you man. <a href=”https://t.co/NNHNc1Swyd”>pic.twitter.com/NNHNc1Swyd</a>

So sad to hear the tragic news about Ray Emery- was a great teammate and person <a href=”https://twitter.com/hashtag/rip?src=hash&amp;ref_src=twsrc%5Etfw”>#rip</a>

Our hearts go out to the family and friends of Ray Emery, our former goaltender, who passed away early this morning. <a href=”https://t.co/QmZJpd7hcM”>pic.twitter.com/QmZJpd7hcM</a>

Horrible to hear about Ray Emery. He was an incredible teammate. <a href=”https://twitter.com/hashtag/Razor?src=hash&amp;ref_src=twsrc%5Etfw”>#Razor</a>