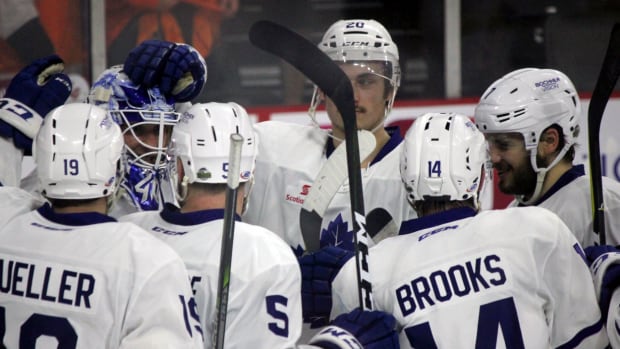 The Toronto Marlies haven’t lost a game since April 27.

After a fantastic 11-2 run through the first three rounds of the American Hockey League playoffs, including back-to-back four-game sweeps that have run their winning streak to nine games, only one team stands in the way of the Toronto Maple Leafs’ top farm team bringing a Calder Cup to the city for the first time in franchise history.

The Marlies take on the Texas Stars, the affiliate of the NHL’s Dallas Stars, when the AHL championship series opens in Toronto on Saturday.

Despite a winning record in each of their last eight seasons, they’ve been unable to capture the elusive Calder Cup. In fact, the Marlies have only been to the final once before in their history. That came in 2012, with a team that boasted the likes of future Leafs Nazem Kadri, Jake Gardiner and Jerry D’Amigo.

The Marlies entered the 2012 Calder Cup final with the same 11-2 playoff record they have today. That team was swept by the now-defunct Norfolk Admirals.

Toronto will be searching for a different result this time around.

After defeating the Utica Comets, Syracuse Crunch and Lehigh Valley Phantoms, expectations are sky high. This is a team that finished at the top of the AHL in the regular season with 54 wins and a league-record-low 170 goals allowed.

Coming out party for Johnsson

Maybe the brightest spot in the playoffs so far for the Marlies is 23-year-old Andreas Johnsson.

After taking part in the Leafs’ heartbreaking playoff loss to the Boston Bruins, in which he tallied two points in six games during the seven-game first-round series, Johnsson has been nothing short of spectacular for Toronto’s farm squad.

In nine post-season games for the Marlies, Johnsson has scored 15 points, good for second in league scoring. His 1.67 points per game ranks first in the playoffs, and his plus-nine rating places him first among the top 20 scorers.

Johnsson has been playing on the left wing with linemates Miro Aaltonen and Carl Grundstrom, two players who also hope to be donning a Maple Leafs jersey next season. Aaltonen fought for the fourth-line centre position with the Leafs at training camp last September, while Grundstrom was a second-round pick of the team in 2016.

Without question, Johnsson will be a regular in the big leagues next year.

Leafs 2017 first-round selection Timothy Liljegren has also been making strides for the Marlies, playing on the third defensive pairing with Travis Dermott.

This week, Dermott said it won’t be long before his 19-year-old teammate is playing in the NHL. Dermott has some NHL experience of his own — he’s played 45 games for the Leafs, including all seven games of the playoff series against Boston.

While big things were expected of the Marlies this post-season, the same can’t be said of the Texas Stars.

The Stars finished second in the Pacific Division and won 38 games this season. Nothing to write home about. But they’ve turned it on in the playoffs, and they’ve been here before.

The 2014 Calder Cup champions have lost only four times in the playoffs this season. They rely on leading scorers Curtis McKenzie and Brian Flynn, both former NHLers, for the bulk of the offence.

After failing to qualify for the playoffs last season, the Stars will be hungry to regain AHL supremacy.

The last time the Marlies played in the Calder Cup final, they faced a Norfolk Admirals team quite similar to the current Toronto squad.

First place team in the league? Check. Dominant in the playoffs? Check. The 2012 Admirals were a tough team to beat, and the Marlies didn’t beat them even once.

The Texas Stars are a very beatable team, especially the way the Marlies have played in the post-season thus far.

The Marlies welcome their southern rivals to Ricoh Coliseum on Saturday and Sunday, before travelling to Texas next week for games three to five.

If necessary, games six and seven are back in Toronto on June 12 and 14.