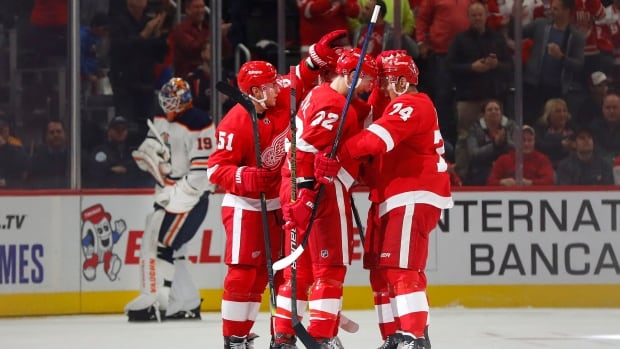 Jimmy Howard made 31 saves for the Red Wings, who won for the first time since Oct. 10 against Montreal.

Larkin converted on a power play 7:41 into the game, lifting the puck from the front of the crease. Nemeth, who signed as a free agent last summer, scored his first goal with the Red Wings less than a minute later.

A long scoreless stretch for both teams ended with 7:12 left in the game when Leon Draisaitl scored from the right circle to pull Edmonton within one.

Edmonton had a man advantage shortly thereafter but could not take advantage despite superstar Connor McDavid and Draisaitl putting shots on net.

Filip Hronek added an empty-net goal late in the game to seal a much-needed victory for the rebuilding Red Wings.

Mikko Koskinen stopped 25 shots for the Oilers, who have dropped four of their last five after opening the season 7-1.

Koskinen, who entered 5-0, gave up two goals on the first seven shots he faced before keeping his team in the game.

Speedy forward Andreas Athanasiou had a pair of breakaways for Detroit and was denied each time by Koskinen.