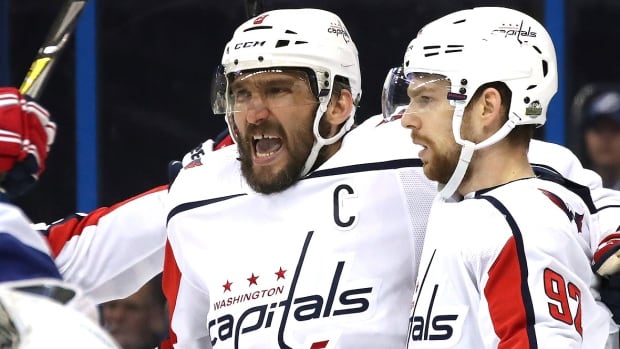 Following another crushing Washington Capitals’ post-season setback last spring, head coach Barry Trotz got on a plane and headed to Russia for a meeting of the minds with his best player.

Trotz and Alex Ovechkin sat down and talked about growing the sniper’s game, similar to how other high-level veterans on the wrong side of 30 have altered their approach to prolong careers.

The coach and superstar discussed preparation, competing at both ends of the rink and setting the tone in training camp for a franchise that was undergoing a major roster overhaul as a number of key veterans headed out the door in favour young, impressionable prospects.

While there were some bumps in the road, the end result has seen a reinvigorated Ovechkin playing an instrumental role in getting Washington within reach of its first-ever Stanley Cup.

“You don’t want to be a one-trick pony in this league,” Trotz said. “The league keeps changing on you.”

That’s a trick coaches, teammates and opponents alike have come to expect.

“The one thing that Alex does better than anybody, maybe in the history of the game, is score goals,” Trotz said. “He has fantastic release. He plays a physical game for a pure-skill guy. There’s so many things that he’s done for the game.

“But we talked about finding other ways to be effective.”

And apart from his usual offensive contribution — he sat second in playoff scoring heading into Monday, two points behind linemate Evgeny Kuznetsov’s 24 — the 32-year-old Ovechkin has done just that in pretty much every facet of his game with a willingness to go the extra mile for the team.

But for all the talk of defensive work, passion and leading by example, Ovechkin still gets paid handsomely to score goals.

The seven-time Richard Trophy winner has 607 of them in 1,003 career regular-season games to sit 19th all-time. Another 49 goals next season would tie him with Brendan Shanahan for 13th.

“Alex has that ability to look beyond what’s there.”

Trotz said he sees a freedom in Ovechkin, who got married in July, that wasn’t present in the past when the Capitals were having great regular seasons before falling well short of their playoff goals.

Ovie a jokester ahead of Cup opener

Ovechkin was also very comfortable when he met the media on Sunday, just over 24 hours before Game 1 against Vegas.

Asked about the impact his first trip to the Stanley Cup Final is having back home in Russia, he didn’t miss a beat.

“Vladimir Putin called me and wished me luck,” Ovechkin said before continuing after a brief pause, “No it’s [a] joke.”

The exchange produced a roar of laughter from reporters and a cheeky grin from Ovechkin, who produced another one-liner when he concluded his press conference by thanking a Chinese reporter for informing him he’s huge in that country.

Prior to this recent playoff success, Ovechkin wasn’t having much fun dealing with the criticism directed his way following the Capitals’ post-season failures. Washington had never moved beyond the second round during his career until this unexpected spring surge, with defeats at the hands of the Pittsburgh Penguins the last two years especially difficult to swallow.

He had 46 goals in 97 career playoff games before adding 12 more on this current playoff run, but despite an experienced roster and plenty of blame to go around, the finger pointing from the outside was often solely aimed at Ovechkin.

‘A guy on a little bit of a mission’

“Being the captain and the highest-paid player, I think he got a lot of unfair criticism,” said Capitals defenceman Brooks Orpik, who has played with and against Ovechkin. “That comes with the territory. I think he understands that, but it was really good to see him get by the second round.

“I don’t think he necessarily did that much different, I think we just played better as a team.”

That’s no doubt been the case during a run that has seen the Capitals down Columbus, finally get past Pittsburgh, and then defeat Tampa Bay to reach their first final since 1998.

But there’s also no debate that Ovechkin is leading the charge.

“I sense a guy that’s very focused,” Trotz said. “A guy that’s on a little bit of a mission.”

A mission he’s willing to do almost anything to complete.