Brock Boeser can’t wait to play for the Vancouver Canucks again, even if it’s in a exhibition game.

The right-winger’s highlight-reel-worthy goals were a rare bright spot in an otherwise dismal season for the Canucks last year before a lower-back fracture cut short his rookie season.

Boeser had 29 goals and 26 assists in 62 games, while Vancouver finished second-last in the Pacific Division with a 31-40-11 record.

The 21-year-old said he isn’t thinking about how many goals he’ll put up this year, but he is eager to build on his success.

“I think the key for me is just to show up to the first pre-season game and hopefully start right where I left off last year,” he said Monday after the Canucks wrapped up a four-day training camp.

“I’m going to go into the game and not worry about injury or anything like that and just focus on the way I play, taking it shift-by-shift, putting in all the effort I can.”

What Boeser will have to show this season is that he can replicate his first-year performance, said Canucks head coach Travis Green.

“To be consistent and to do it year after year is what the great goal scorers do. And I know that, in his mind, that’s what he wants to do,” he said.

“He doesn’t have to prove anything to me. It’s proving it to himself and his teammates. And that happens over time.”

Just when fans will get their first glimpse of Boeser this year remains unclear.

Green said he plans to keep two groups for the team’s seven exhibition games and has a “roadmap” in mind, but he stayed tight-lipped Monday about possible lineups.

The fifth-overall pick at the NHL’s 2017 draft joined the Canucks other young prospects in Penticton, B.C., for a showcase in early September before hitting the main camp in Whistler. 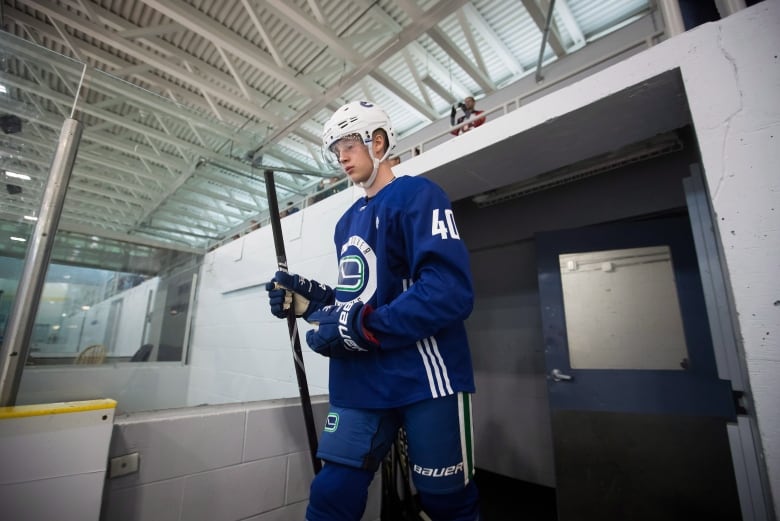 Now the centre is looking forward to getting a chance to show what he can do.

“I have opportunity to show hopefully I can play good in the games,” he said. “I will take those (exhibition) games and try to make the most of it.”

The Canucks had ample opportunity to see what games might be like at training camp, where they scrimmaged three days in a row.

The scrimmages were an opportunity to see things that may otherwise go unnoticed, Green said.

“Guys are trying to make the team and not just make the team, but fighting for ice time, special teams time,” the coach said. “Everyday you’ve got to go to work and give your best.”

It was also a chance for coaching staff to experiment with different lines.

Pettersson skated with fellow Swedish prospect Jonathan Dahlen on his left wing and Nikolay Goldobin on his right for most of camp.

Others were switched around.

Getting a chance to skate with different guys is good because it creates versatility, said Bo Horvat, who lined up with Boeser last season.

“There’s going to be points in the season where teams are going to hone in on us and you got through little slumps and stuff like that,” said the 23-year-old centre. “So to get chemistry with everybody on the team’s going to be important.”

Horvat is going into his fifth season with the Canucks, and said he’s optimistic after a fast-paced, competitive training camp.

“I find the speed and the skill even in scrimmages and practices has been really high,” he said. “So it’s looking bright for sure.”