The Ottawa Senators’ contract offer to defenceman Erik Karlsson was for eight years and $80 million US, and they are now in serious trade talks with multiple highly interested suitors, according to an NBC Sports report on Tuesday.

Senators general manager Pierre Dorion said Sunday the team had offered Karlsson — who is entering the final year of a seven-year, $45 million deal he signed in June of 2012 — an extension, but declined to discuss anything further.

NBC’s figures are the first details to be reported on the offer, which would average $1 million less annually than the extension defenceman Drew Doughty signed with the Los Angeles Kings on Friday.

The New York Post reported Monday that — with their offer declined — the Senators have given interested teams permission to discuss an extension with Karlsson, which could clear the way for a trade.

The key to getting a deal done could be a team’s willingness to also take back Bobby Ryan’s contract, which has four years and $30 million remaining. In February, Vegas reportedly was not inclined to give up a package of multiple
first-round picks and a top prospect while also taking back Ryan. 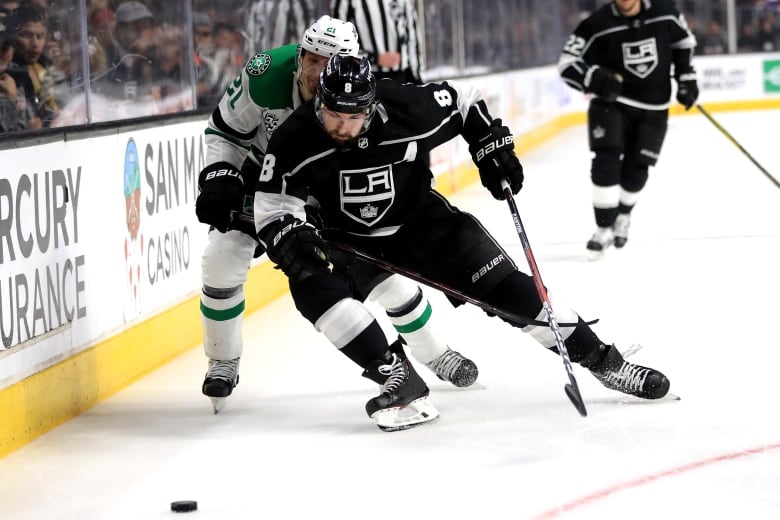 Doughty is about six months older than Karlsson — who turned 28 at the end of May — and has been a Norris finalist four times, winning once.

Karlsson has won the Norris twice and been runner-up twice, while tallying 355 points (83 goals, 272 assists) in 394 games in five seasons since becoming the Senators’ captain. He scored just nine goals last season — his fewest since
2012-13 — while missing 11 games, but his 53 assists tied for third among all NHL defencemen.

Trade speculation has swirled around Karlsson for much of the last year, helping fuel the fire of fans who oppose owner Eugene Melnyk.

Former Senators captain Daniel Alfredsson — who said in May “we hope we get a new owner” — told reporters this spring that Karlsson wants to remain with the team, “but it’s not all in his hands.” Alfredsson played with Karlsson for four years in Ottawa and also on the Swedish national team at the 2014 Olympics.