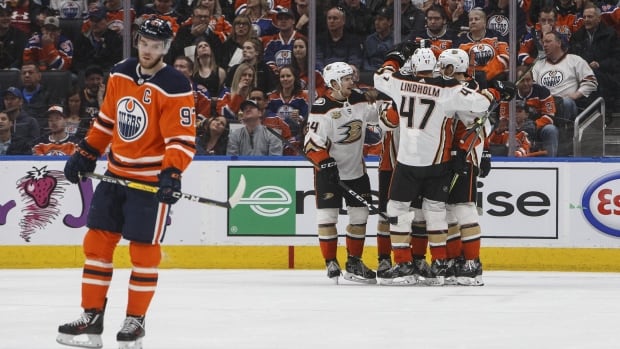 Rickard Rakell was a one-man wrecking crew for the Anaheim Ducks on Saturday.

Rakell notched a natural hat trick in the second period as the Ducks beat the Edmonton Oilers 5-1.

“I don’t think I’ve ever done that before. It’s nice to do that for the first time,” Rakell said.

“It felt great for our team, we were not happy with how we got pretty much dominated by Calgary last night [6-1 loss]. So when we have a good first period like that, we try to keep it going in the second and when you get a couple of goals, the whole team feels good and it’s much easier to play.”

Corey Perry and Devin Shore also scored for the Ducks (33-37-10). Anaheim has won two of its past three, but is out of the playoff race.

“We’re depleted, that’s an understatement,” Perry said about his team’s injuries. “Guys are getting a chance to play bigger roles, bigger minutes, learn what the game is in this league and how to play every single night and they’re getting a great experience for it.”

Rakell recorded a natural hat trick during the 2nd period of the Anaheim Ducks 5-1 beat down of the Edmonton Oilers. 0:30

Sam Gagner replied for the Oilers (34-35-9), who have lost two straight and are now all but eliminated from playoff contention.

Oilers forward Milan Lucic, who picked up his 500th NHL point, said basically all that is left is to play for pride.

Shortly after Jakob Silfverberg rang a shot off the post, the Ducks scored with five minutes left in the first period. Oilers goalie Mikko Koskinen got a piece of a Perry shot with his glove, only to see it trickle behind him into the net.

The Ducks took a two-goal lead 1:21 into the second period when Silfverberg kept a puck in at the line and sent it to Rakell, who scored on a one-timer.

Anaheim made it 3-0 nine minutes into the second when Rakell backhanded in a rebound for his second goal of the night and his sixth in the past five games.

Rakell picked up the hat trick with five minutes left to play in the second period, his 18th of the season. Anthony Stolarz replaced Koskinen in net after that goal.

Anaheim added to its lead a minute-and-a-half into the third after Shore scored on a blast off of a faceoff.

Edmonton broke Ducks goalie John Gibson’s shutout bid with seven minutes left in the third on a goal by Gagner.