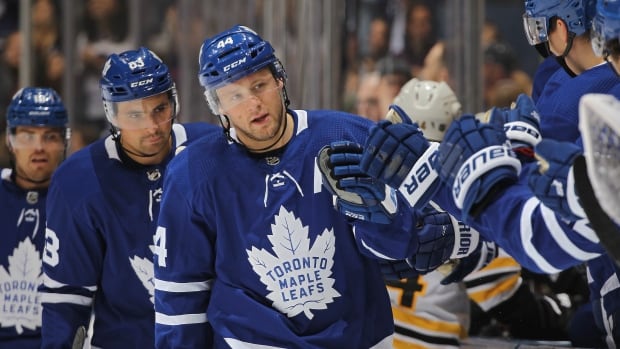 Morgan Rielly scored at 3:54 of overtime as the Toronto Maple Leafs defeated the Boston Bruins 4-3 on Saturday night.

The goal was originally credited to Mitch Marner, but was later given to Rielly, as the puck went off his shin.

Rielly also scored in regulation for Toronto (5-3-1), along with Alexander Kerfoot and Dmytro Timashov, who potted his first NHL goal. Frederik Andersen made 42 saves.

David Pastrnak, with a goal and an assist, Jake DeBrusk and Danton Heinen replied for Boston (5-1-2), which got 25 stops from Jaroslav Halak.

Marner’s winner came after he took a feed from Auston Matthews and ripped his fourth goal of the season past Halak’s blocker before jumping into the arms of Rielly, who added an assist on the play, in celebration.

Down 2-1 despite a dominating second, the Bruins tied the score at 1:36 of the third just as a Leafs’ penalty was about to expire when Heinen wired his first upstairs on Andersen.

But Toronto replied just 61 seconds later when Kerfoot backhanded a loose puck past Halak for his third of the season.