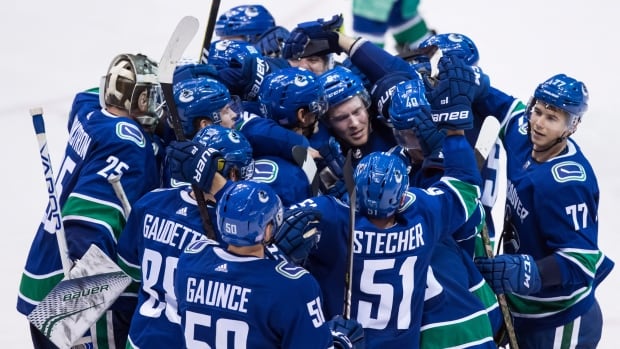 Rookie Elias Pettersson had two goals, three assists and Derek Pouliot scored with less than 30 seconds to go in overtime, giving the Vancouver Canucks a 7-6 win over the Colorado Avalanche on Friday.

Pettersson’s third assist of the night came on Pouliot’s winner, while his second goal came in the final minute of regulation to force extra time.

Brock Boeser scored twice in the victory. Loui Eriksson and Markus Granlund rounded out the offence for Vancouver (9-6-0).

Nathan MacKinnon found the net twice for Colorado (7-4-3), while his Sheldon Dries, Ian Cole, Alexander Kerfoot and Nikita Zadorov all scored one each.

NHL points leader Mikko Rantanen registered a trio of assists for the Avs.

Jacob Markstrom stopped 23-of-29 shots for Vancouver as Colorado goalie Philipp Grubauer turned away 30-of-37 shots.

Boeser put the Canucks on the board just 58 seconds into the game after Pettersson slid him a long pass across the ice. The right winger got the puck on his tape and gunned towards the net, flipping a shot past Grubauer.

Dries responded for the Avalance early in the second frame, re-directing a shot from centre Cody Wilson into the Vancouver net.

It was the first of six goals in 12 minutes.

Boeser was next to find the net for his second goal of the night. He collected another pass from Pettersson and rocketed a shot in from the face-off circle.

Fifty seconds later it was Cole’s turn. The Avs defenceman wound up from the blue line and put a shot in the top right corner of the net.

Nearly halfway through the period, Ericksson calmed a bouncing puck then popped it in past the Avs goalie for his first goal of the season.

MacKinnon tied things up again shortly after, scoring off a give-and-go with Rantanen.

Kerfoot was the first to give Colorado the advantage 12:36 into the second frame, splitting the Vancouver defence and firing a wrist shot past Markstrom.

Five minutes passed before the red light went off again.

Pettersson put in the final goal of the period, scooping up a rebound at the top of the crease and poking it in to tie things up 4-4.

The 19-year-old centre was named the league’s rookie of the month for October. He had seven goals and three assists in eight games.

Zadorov kicked off the third period with yet another goal, scoring his first of the year a minute and a half in.

Granlund responded for the Canucks on a power play with just under 10 minutes to go in the game.

Vancouver right winger Nikolay Goldobin struggled to hang on to the puck in front of the net, but found a way to dish it to Granlund, who popped it in past Grubauer.

MacKinnon scored again for the Avs on a late-game power play to make it 6-5, but the Canucks refused to quit.

With 36 seconds to go, Pettersson tied the game with his second of the night.

Next up, the Canucks will head out on a six-game road trip, starting with a visit to the Detroit Red Wings on Tuesday.