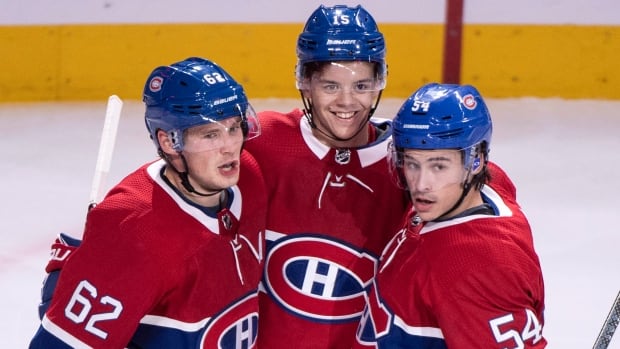 Charles Hudon had the eventual winner as the Montreal Canadiens scored three unanswered goals in 92 seconds en route to a 3-1 victory over the New Jersey Devils on Monday in their pre-season home opener at Bell Centre.

Victor Mete and Jesperi Kotkaniemi also scored for the Canadiens.

Antti Niemi made eight saves on nine shots for Montreal before making way for Charlie Lindgren.

Blake Speers had a short-handed goal for the Devils.

Eddie Lack made 13 saves and didn’t allow a goal through 40 minutes before ceding the net to Mackenzie Blackwood.

New Jersey opened the scoring when Speers picked off a pass from Habs defencemen Simon Despres at the Devils’ blue line. Speers sped up ice with the puck and fired it past Niemi.

Defenceman Joe Morrow scored with eight minutes remaining in the third period to lift the Winnipeg Jets to a 2-1 victory over the Minnesota Wild in pre-season action.

Morrow’s shot appeared to go under Wild goalie Andrew Hammond and bounce out off the post at 11:45, but it was signalled a good goal, bringing the crowd at Bell MTS Place to their feet.

The game was a battle of the backup goalies as the Jets sat starter Connor Hellebuyck and Minnesota did likewise with Devan Dubnyk.

Laurent Brossoit, a free-agent Winnipeg signing, made 38 saves. He got the nod ahead of Eric Comrie. A former backup with the Edmonton Oilers, Brossoit is on a one-year, one-way contract. Comrie has a one-year, two-way deal.

Hammond stopped 28 shots for Minnesota. The former Ottawa netminder signed a one-year, two-way deal in the summer after being with Colorado last season following back surgery and a trade by the Senators. The 30-year-old is trying to get the job away from Alex Stalock.