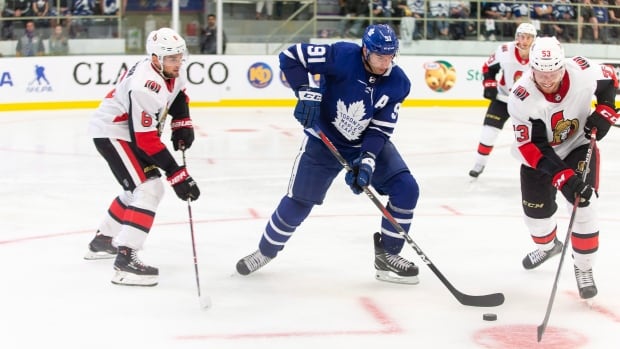 In the hours after the Maple Leafs signed John Tavares this summer, Mike Babcock mused about playing his shiny new centre alongside Mitch Marner.

After just one pre-season game, Toronto’s head coach must be smiling at what the finished product could eventually look like.

Tavares and Marner combined for six points Tuesday as the Leafs defeated the Ottawa Senators 4-1 in the opener of the NHL exhibition schedule for both clubs.

“They had a good night,” said Babcock, trying to downplay the performance. “We got a lot of good signs.”

Tavares scored his first two goals in a Toronto uniform and set up another, while Marner ripped a laser home in the third period to go along with two assists.

“It’s one exhibition game,” Tavares said. “It’s a start. Good to get things going and get some positive results, but we know we have a lot to work on.”

The trio of Tavares, Marner and Zach Hyman got better as the night went on for the Leafs, who were without about half their regular roster, including No. 1 centre Auston Matthews and starting goalie Frederik Andersen.

“In the first period we were just trying to get the feel out there,” Marner said. “In between periods we talked a little bit about what we like to do, the second there was more chemistry on our line and we were rewarded.”

Andreas Borgman also scored for the Leafs, while Ryan Dzingel replied for the Senators, who held a 35-30 edge in shots.

‘Nice to be out there again’

The Senators grabbed a 1-0 lead 21 seconds in when Dzingel took a pass from Matt Duchene from behind the net after a Nazem Kadri turnover to beat Leafs goalie Curtis McElhinney upstairs.

Tavares said following the morning skate he gets nervous before games no matter the time of the year or the venue, but those butterflies probably went away about five minutes later when Marner fed him down low on the power play before he beat Mike Condon past the blocker to tie the score.

“It’s just nice to be out there again,” Tavares said. “It’s always good to get rewarded.”

Borgman then gave Toronto a 2-1 lead on a 2-on-1 when the defenceman jumped into the rush and took a pass from Emerson Clark just 1:22 later.

After the teams played a scoreless middle period, Tavares added his second on a great effort in front in the third.

With a tired Senators group stranded by an icing call, Tavares outmuscled Ottawa defenceman Patrick Sieloff for a loose puck in the crease at 6:06 after Justin Holl’s point shot squeaked through the pads of backup goalie Marcus Hogberg.

Toronto then put things out of reach with 8:12 left when Tavares stole the puck in the neutral zone and rushed the other way before eventually finding Marner, who whipped a wicked wrist shot past Hogberg.

“I don’t think there was ever really a doubt,” Leafs defenceman Morgan Rielly said of Tavares and Marner finding chemistry. “When you put players of that quality together, normally it doesn’t take long for them to gel with one another.

“That was on display tonight.”

Tavares, who turns 28 on Thursday, inked a seven-year, $77-million US contract on Canada Day after bolting the New York Islanders for the team he grew up cheering for in the suburbs west of Toronto. The signing pushed a franchise that has not won a playoff series since 2004 into the league’s stratosphere as favourites among bookmakers to lift the Stanley Cup this spring.

Ottawa, meanwhile, has plummeted down the standings and been dogged by a number of off-ice controversies over the past 12 months.

Tuesday also marked the dawn of a new reality in the nation’s capital as the rebuilding Senators played their first game since the Erik Karlsson saga ended last week with the deal that sent the captain and star defenceman to the San Jose Sharks for four young players and two draft picks.

Lucan won the right to host Kraft Hockeyville in a vote on social media last year, with 1,318 tickets for the game distributed across the region and through a lottery. The town also gets $250,000 for arena renovations.

Store fronts across Lucan welcomed both teams, but this is decidedly blue-and-white country.

One church’s sign read: “Love Thy Neighbour Even If They Are Not Leafs Fans.”

Tavares, Kadri and Marner all played junior for the London Knights of the Ontario Hockey League, as did Ottawa rookie Alex Formenton, making Tuesday a homecoming of sorts. Kadri and DeMelo are both from London.

“What a thrill for the town of Lucan,” Tavares said. “It was fun.”

Ty Rattie scored twice as the Edmonton Oilers chalked up their second win in a row , beating the Vancouver Canucks 4-2 on Tuesday night.

Jesse Puljujarvi and Caleb Jones also scored for the Oilers, who got another assist from Kailer Yamamoto, who put on a dazzling performance in the team’s Monday night victory over Calgary.

Sven Baertschi and Nikolay Goldobin replied for the Canucks.

Edmonton opened the scoring nine minutes into the first period with Puljujarvi snapping off a shot that slipped through the pads of Canucks goalie Anders Nilsson.

Shortly after the second frame started, the Oilers struck again, this time on the power play. Rattie found the puck during a battle in front of the Canucks net and poked it in past Nilsson for his first goal of the night.

He tallied his second of the night in the third period after beating Vancouver defenceman Ben Hutton to the net.