Ryan Straschnitzki was back on the ice Friday, for the first time since the tragic bus crash that changed his life.

Straschnitzki and his father Tom both played sledge hockey for the first time Friday in Okotoks, Alta., where they were given a tutorial by Team Canada’s Chris Cederstrand.

For Ryan — who wore his Humboldt Broncos gear — the day was both emotional and a little frustrating, too, said Tom in an interview with CBC.

“Last time he was on the ice was the day before the accident, so this was his first time [since] on there. And as soon as those blades touched the ice, I’ve never seen a smile that big. It was massive.

“And then he just took off.” 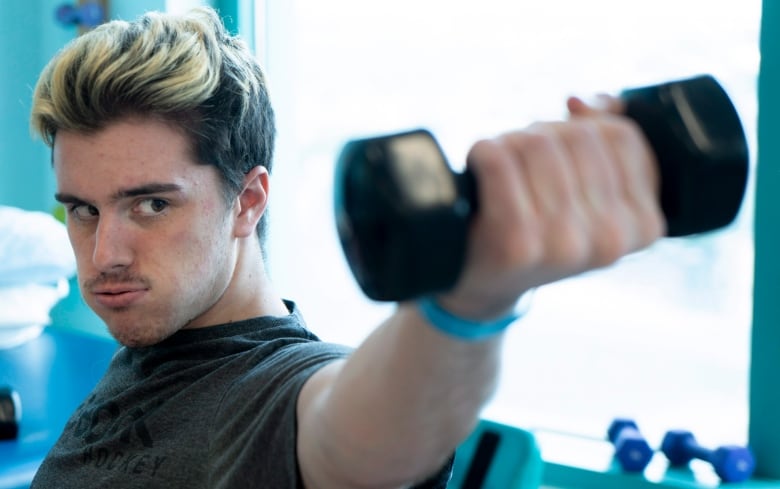 Ryan was left a paraplegic in the Humboldt Broncos bus crash in April that left 16 people dead and 10 others injured.

While returning to the rink was a joyous turning point for Straschnitzki, it was also a moment of discovery in many ways, as he learned that sledge hockey has its own unique geometry, and even a few secret tricks.

“He was trying to figure out how to turn,” said Tom.

“So we’re saying, drop a shoulder — then he gets the hang of it.”

Shooting from a sled is different too.

“You have to have the stick flat now to get the shot off — like the whole stick,” Tom said.

“Where in hockey, you’re standing, and you kind of angle it — so it’s a whole new different way shooting — so it’s just [like] re-learning hockey.”

Ryan can be a perfectionist, too, Tom said.

“He already texted me this morning and wanted me to bring the sled into the parking lot of the hotel, so he could practice shooting.”

Straschnitzki also got a few insider tips from Cederstrand, who arranged ice time at the Okotoks rink.

They were joined by former Flames draft pick, Corban Knight, who’s now with the Philadelphia Flyers.

“Chris was showing us little tricks they did in the Olympics,” Tom said.

“Once you’re ahead of a guy, it’s hard for them to catch up. And to get ahead of him, you do the little tricks, like move the nose of the sled because you turn the opposite way, because there’s no blade at the end. The blade is under your butt.

“If you lean back too far, well your feet are going straight up in the air.”

A summer of physiotherapy

Straschnitzki is home doing physiotherapy for the summer, and hopefully picking up the nuances of sledge hockey ahead of the Cowboys and Sleds tournament and fundraiser set for Sept. 15 in Okotoks.

It’s a joint fundraiser for Straschnitzki and first responders, and there will be chuckwagon drivers, NHL players, Team Canada sledge players, in addition to Tom — who says he’s terrible at sledge — and Ryan.

Living in hotel during renovations

In the meantime, the family is living in a hotel while their home gets renovated to make it accessible for Ryan.

It might have been the first time back on the rink, but it didn’t take long for him to settle in.

“We couldn’t get him off the ice,” Tom said. “But eventually the rink rats had to come in and go, ‘OK guys, the ice is rented for someone else.'”