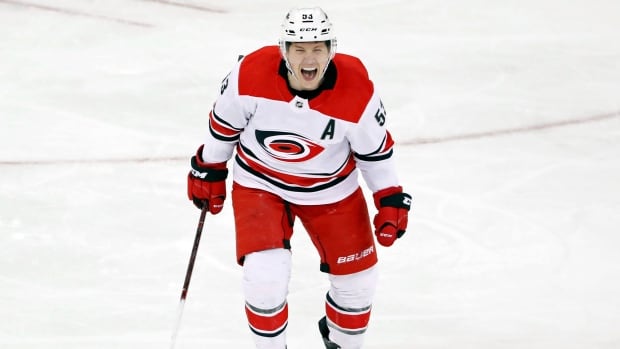 The Buffalo Sabres acquired forward Jeff Skinner in a trade with the Carolina Hurricanes in a move that continues an off-season roster shake-up for both teams.

The Hurricanes acquired prospect forward Cliff Pu and three draft picks, including a second-round selection in 2019, in the trade completed Thursday night. The Hurricanes also acquired Buffalo’s third- and sixth-round picks in the 2020 draft.

The 20-year-old Pu was the Sabres’ third-round pick in the 2016 draft and completed his fourth season in the Ontario Hockey League last year. He has scored 80 goals and 210 points in 232 career games split over three teams.

Skinner is an eight-year NHL veteran and was the NHL’s rookie of the year in 2011. He’s a three-time 30 goal-scorer and coming off a season in which he had 24 goals and 49 points in 82 games.

The Sabres are retooling their roster after finishing last for the third time in five seasons. Buffalo traded forward Ryan O’Reilly in a multi-player deal with St. Louis last month.

Buffalo also acquired forward Conor Sheary in a trade with Pittsburgh in June.

The Hurricanes, in June, acquired defenceman Dougie Hamilton and Michael Ferland in a trade that sent defenceman Noah Hanifin and forward Elias Lindholm to Calgary. Carolina has missed the playoffs for nine straight seasons — the NHL’s longest active drought.

The 26-year-old Skinner wasn’t considered part of the Hurricanes’ long-term plans and due to become an unrestricted free agent next summer.

He is entering the final year of a six-year contract that contained a no-trade clause and will pay him $6 million US this season — which would have matched Jordan Staal and Justin Faulk as the highest salaries on the team.

“This was the right time for us to move on and provide Jeff with a fresh start in Buffalo,” Hurricanes general manager Don Waddell said in a statement released by the team. “We talked to every team in the league over the past four months, and ultimately the Sabres were the team that provided us the best value in return.”

Sabres GM Jason Botterill has placed an emphasis on adding experience depth to his top-six group of forwards, as well as improving the team’s production in even-strength situations.

Skinner ranks seventh among NHL players in having scored 74 even-strength goals over the past three seasons.

The knock on him has been defence, with his plus-minus rating of minus-27 the lowest on the team last season.