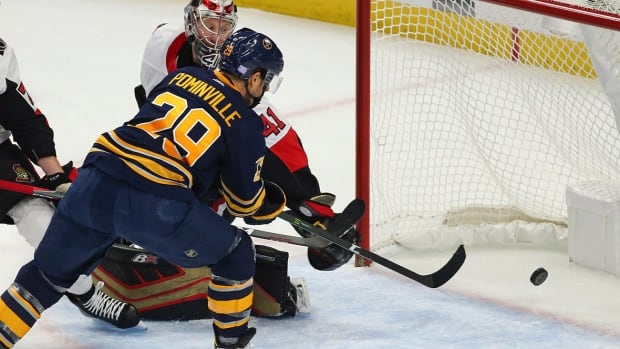 Jeff Skinner and Jason Pominville each had two goals and an assist to lead the Buffalo Sabres to a 9-2 win over the visiting Ottawa Senators on Saturday.

Pominville extended his point streak to seven games, his longest since 2014, after being honoured in a pre-game ceremony for playing his 1,000th NHL game Thursday night in Ottawa.

Max McCormick and Thomas Chabot scored for Ottawa and Mike McKenna stopped 25 shots after replacing Craig Anderson in goal late in the first period. The Senators have lost five of their last six with the lone victory coming against Buffalo on Thursday.

Okposo opened the scoring a little over five minutes in in on rising slap shot from outside the right circle.

Skinner knocked in the rebound off Eichel’s shot from the point less than two minutes later.

Pominville made it 3-0 when he batted a bouncing puck after Skinner’s shot, chasing Anderson with 5:35 left in the first period.

Buffalo scored four more goals in the first eight minutes of the second period. The first two came in a span of 13 seconds.

Mittelstadt’s backhand pass set up Skinner in the slot for his team-leading ninth goal on a power play 3:55 into the period.

Berglund then set up Girgensons from behind the net to put the Sabres up 5-0.

After McCormick put the Senators on the board with his first goal of the season, Pominville netted his second of the game and eighth of the year on an assist from Eichel.

Sheary scored Buffalo’s seventh goal on a breakaway 7:48 into the second period. Berglund added the eighth goal 5:41 into the third period and Sheary dropped the puck off to Mittelstadt for the final goal with 6:47 left to play.

Sabres rookie Rasmus Dahlin, the No. 1 overall pick in the 2018 draft, did not play in the third period due to an undisclosed reason. … Sabres F Sam Reinhart had two assists and now has eight points in Buffalo’s seven wins and none in seven losses.