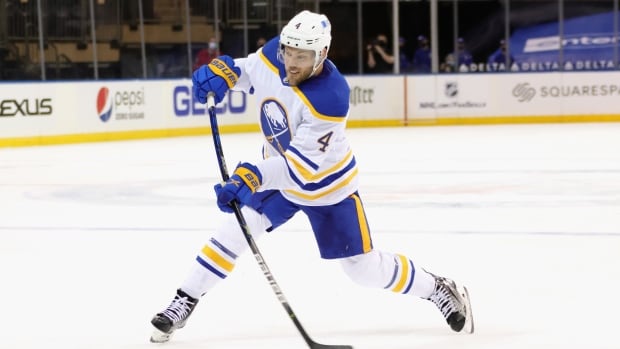 The Buffalo Sabres are taking the precautionary step of scratching forward Taylor Hall for their game at New Jersey on Tuesday in anticipation the NHL’s 2018 MVP will will be traded in the coming days.

Team spokesman Chris Dierken announced that Hall will not be in the lineup in providing the update shortly after interim coach Don Granato called it a possibility before concluding his teleconference call with the media on Tuesday.

The decision to sit Hall comes in the final week before the NHL’s trade deadline on Monday, and with the slumping Sabres in sell-off mode. Buffalo sits last in the overall NHL standings and is all but mathematically certain to extend its playoff drought to an NHL record-matching 10th consecutive season.

Hall signed a one-year, $8 million contract with Buffalo in October and is eligible to become an unrestricted free agent this summer. With most teams tight against the league’s $81.5 million salary cap, which remained flat this season, the Sabres are expected to retain a portion of Hall’s pay to make it easier to trade him.

Rather than spurring a Sabres’ turnaround, Hall’s addition has hardly made a dent in the team’s decade-long woes. The six-time 20-goal-scorer has just two goals with 17 assists in 37 games this season and hasn’t scored in 16 consecutive outings.

General manager Kevyn Adams didn’t rule out trading Hall last month, while the player has publicly stated he’s willing to listen to offers in the event he has to waive the no-trade clause in his contract.

The Sabres have already been active on the trade front after dealing veteran centre Eric Staal to Montreal and third-string goalie Jonas Johansson to Colorado last month.

Hall’s drop in production has coincided with the absence of captain and top-line leader Jack Eichel, who has been dealing with a series of injuries since the start of the season. Eichel remains out indefinitely and has not played since sustaining an upper-body injury on March 9.

The 29-year-old Hall is on his third team in two years. The Devils traded him to Arizona last season.

Hall was lured to Buffalo in part because of the presence of Ralph Krueger, who previously coached the player during Hall’s first three NHL seasons with Edmonton. Krueger was fired on March 17.