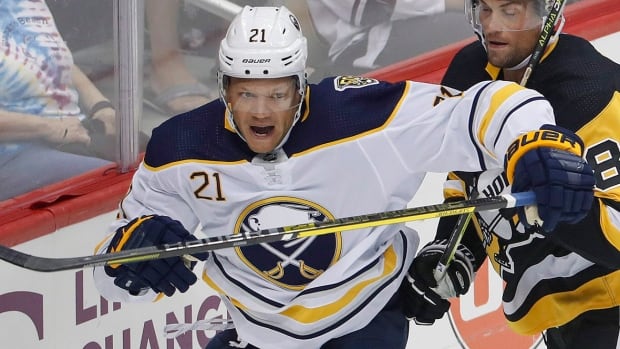 Buffalo Sabres forward Kyle Okposo is out indefinitely after being diagnosed with his fourth concussion in a little more than 2 1/2 years.

The Sabres provided the update in posting their weekly injury report Monday, two days after Okposo was hurt in a 4-2 win over the Ottawa Senators. It happened with five minutes left in the second period when Okposo took the ice and accidently collided with Senators defenceman Ron Hainsey.

This marks the fourth consecutive season the 31-year-old player has been sidelined by a concussion. The most serious one happened when he missed the final two weeks of 2017-18 and spent nearly a week in a hospital after what he called a routine hit in practice.

Okposo missed three games in March 2018 after a concussion from a collision with Ottawa’s Bobby Ryan. And he missed a week last February when punched in the face by New York Rangers defenceman Tony DeAngelo.

Okposo is a 13-year veteran in his fourth season in Buffalo. He has a goal and five points in 19 games.

The Sabres also announced centre Tage Thompson will be out three to five weeks with an upper body injury. He was hurt in a 4-1 loss at Chicago on Sunday and after being called up from the minors to replace Okposo.