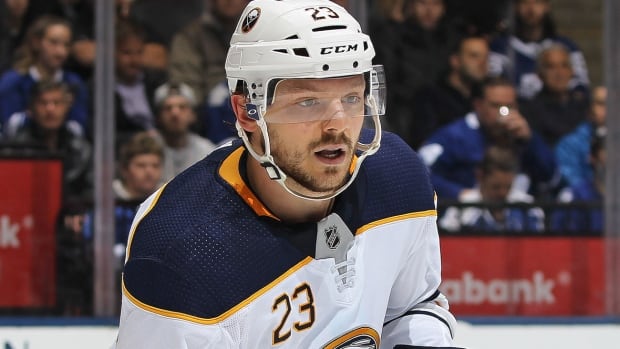 The Buffalo Sabres can finally prepare for the start of the season with their full complement of forwards after signing Sam Reinhart to a two-year, $7.3 million US contract on Wednesday.

Reinhart was a restricted free agent, and the team’s lone off-season holdout before reaching the deal after missing the first five days of training camp and two pre-season games.

The signing came during the Sabres’ day off and after Reinhart’s​ representatives were spotted attending Buffalo’s 3-2 win over the Pittsburgh Penguins on Tuesday night. Reinhart has spent much of the past month in Buffalo working out, including taking part in informal skates with his teammates.

The delay in reaching a deal was partly a result of Reinhart’s inconsistent production during his three-plus NHL seasons since the Sabres selected him with the No. 2 pick in the 2014 draft.

Reinhart’s inconsistencies were apparent last year, when he managed seven goals and six assists in his first 44 games. He closed the season by scoring 18 goals and 19 assists in his final 38 games and finished with a career-best 25 goals and 50 points.

Reinhart can play both wing and centre. He’s projected to fill a role on one of Buffalo’s top two lines on a roster that underwent a significant overhaul this past summer. The changes came after the Sabres finished last in the standings for the third time in five years.

The Sabres made trades to acquire forwards Conor Sheary from Pittsburgh and Jeff Skinner from Carolina. They also dealt centre Ryan O’Reilly to St. Louis in exchange for forwards Tage Thompson, who is entering his second NHL season, and veterans Vladimir Sobotka and Patrik Berglund.

Despite the changes, general manager Jason Botterill stressed Reinhart was expected to play a significant role on the team.

“He is part of the rebuild. That’s the bottom line,” Botterill said last week. “It’s evident that he’s worked very hard this summer.”

The Sabres return to practice Thursday, and play a pre-season game at Toronto on Friday, before hosting the Maple Leafs the following night.