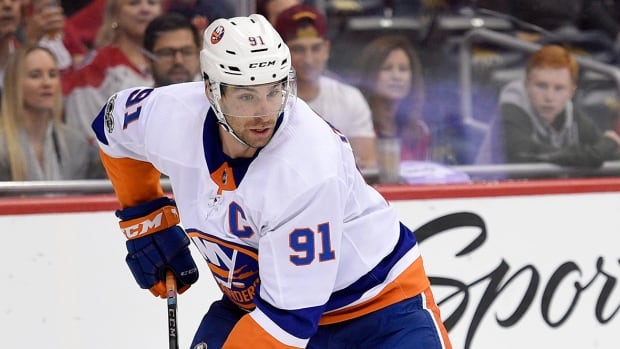 That’s what NHL general managers are saying this off-season after the Stanley Cup Final run of the expansion Golden Knights contributed to what’s expected to be a healthy increase for the salary cap. With elite centre John Tavares, No. 1 defenceman John Carlson and a strong group of free agents available soon, the ceiling for player spending will rise to between $78 and $82 million from $75 million.

Gentlemen, open your wallets — players like Tavares, Carlson and forwards James van Riemsdyk and Paul Stastny won’t come cheap. They’re just a few of the big-name players who could be on the move this off-season.

With GMs meeting Thursday in Dallas and around each other this weekend at the draft, trade talk is percolating before free agency opens in July. Ottawa traded winger Mike Hoffman to San Jose on Tuesday, and Buffalo centre Ryan O’Reilly, Pittsburgh forward Phil Kessel, Montreal captain Max Pacioretty and Washington backup goaltender Philipp Grubauer could all be on the move in the next several days.

Ottawa captain Erik Karlsson is the star who will go to the highest bidder if the Senators are willing to trade the Norris Trophy-winning defenceman with one year remaining on his contract. GM Pierre Dorion seemed to be in a tough spot after it was revealed last week that Karlsson’s wife Melinda has filed an order of protection against Hoffman’s girlfriend, Monika Caryk, alleging harassment and bullying. But he solved that issue quickly by acquiring Mikkel Boedker from the Sharks on Tuesday in the first major trade of the off-season.

“Today’s trade showcases our determination to strengthen the future of the team by improving chemistry, leadership and character in the locker room and on the ice,” Dorion said. “We are confident it is a step in the right direction for the long-term success of this organization.”

More immediate decisions await the Islanders and Capitals. New York should probably make a move to re-sign Tavares before its face of the franchise can begin speaking with other teams June 25, and recently hired president of hockey operations Lou Lamoriello has to hire a new coach.

The Islanders might’ve gotten a fortunate bounce there when Barry Trotz resigned from his job with Washington less than two weeks after lifting the Cup. Re-signing Tavares and hiring a replacement for fired coach Doug Weight go hand-in-hand.

If it doesn’t work out and Tavares hits the open market, a contract with a salary approaching Connor McDavid’s $12.5 million isn’t out of the question. Nashville GM David Poile said cap situations put five or six teams in position for top-end free agents and knock about half the league out of the running.

“We all have different commitments already of contracts,” Poile said. “Some teams have a lot of room. Some teams don’t have very much room.”

Big-revenue teams with money to spend include the retooling New York Rangers and the rising Toronto Maple Leafs. The Rangers are among several teams linked to Russian Olympic MVP Ilya Kovalchuk, who’s looking to return to the NHL after five seasons in the Kontinental Hockey League.

Former Los Angeles Kings defenceman Slava Voynov, who won an Olympic gold medal with Kovalchuk, is back in the U.S. and could be on the way to returning. Voynov was convicted of domestic abuse and is suspended indefinitely by the NHL, which makes it unclear how a team will pave the way for him to play.

Hundreds of current free agents don’t know where they’ll be playing next season. Beyond Tavares, Carlson is the most in-demand pending free agent after leading all defencemen in regular-season and playoff points.

Carlson plans to have his day with the Stanley Cup in Washington, but because of the uncertainty of the off-season, there’s no guarantee he’ll be there this fall.

“We’ll see what happens,” Carlson said. “We’ll talk and go from there. I don’t really know what else to say other than that. I love it here and all that, I want to stay here, but there’s more to it than that.”