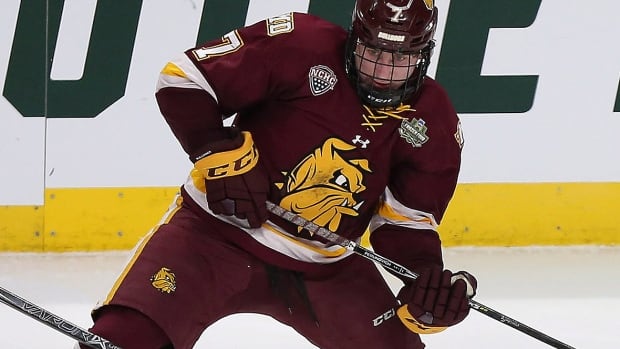 “I’m extremely honoured and humbled,” Perunovich said. “Five other Bulldogs have won this prestigious award, so it is just a privilege to join them.”

Perunovich was second in the nation with 34 assists and had six goals in 34 games, becoming the first defenceman to lead the National Collegiate Hockey Association in scoring. He was drafted by the Blues in the second round in 2018.

“He is a difference-maker, that’s for sure,” Bulldogs head coach Scott Sandelin said. “He’s the type of impact player who can take control of a game. He’s had a tremendous season — and a tremendous three-year career here — and is certainly deserving of this award.”

The season was cancelled March 12 because of the coronavirus pandemic. The award announcement was originally set for Friday night on the eve of the NCAA championship game in Detroit, where Perunovich and the Bulldogs hoped to play for a third straight title.

The undrafted Kawaguchi had 15 goals and 45 points in 33 games. He’s returning to North Dakota for his senior season.

Swayman was 18-11-5 with a 2.07 goals-against average and .939 save percentage. He recently signed with the Boston Bruins.

The award is named in honour of Baker, the former Princeton hockey and football star who was World War I fighter pilot. He was killed in a plane crash in France after he was scheduled to return home.