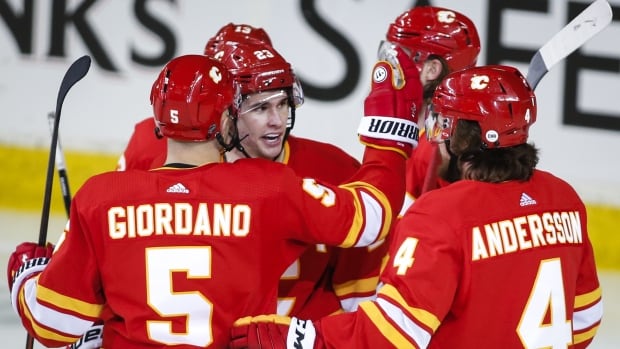 Sean Monahan scored twice to set a new career high in goals and also added two assists, leading the Calgary Flames to a 6-1 win over the Anaheim Ducks on Friday.

Monahan entered the night with two goals in his last 19 games, but he broke out with a big game offensively and is up to 33 on the year — surpassing his previous career best of 31 goals.

Seeking their first division title since 2005-06 and first conference title since 1989-90, the Flames extend their lead atop the Pacific Division and Western Conference to eight points over San Jose. The Sharks have five games remaining including a home date with Calgary on Sunday.

Andy Welinski, with his first NHL goal, scored for Anaheim (32-27-10). The injury-ravaged Ducks, already eliminated from playoff contention, are 1-1-1 on their four-game road trip, which wraps up Saturday night in Edmonton.

Tied 1-1 after the first period, Calgary took its first lead 3:37 into the second when Monahan knocked in Rasmus Andersson’s rebound.