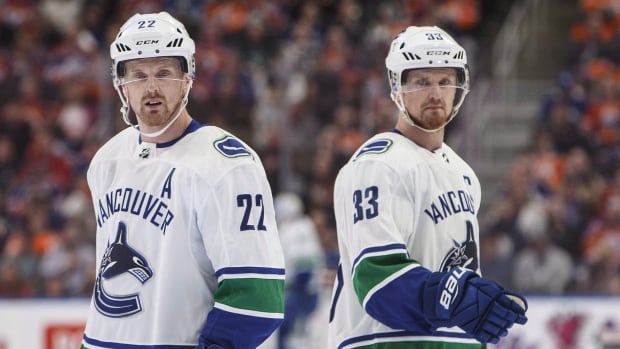 Daniel and Henrik Sedin will soon have their jerseys hanging in the rafters of Rogers Arena.

The Vancouver Canucks announced on Thursday that the numbers of the recently retired twin superstars will be retired as part of a week-long celebration next season.

No date has been set for the event.

Centre Henrik Sedin wore No. 33 for the Canucks. He had 240 goals and 840 assists over 1,070 games and holds the franchise’s points record.

The 38-year-old brothers retired at the end of last season after spending their entire 17-year NHL playing careers with the Canucks.

The organization has previously retired four other numbers: right-winger Stan Smyl’s No. 12, left winger Markus Naslund’s No. 19, right winger Pavel Bure’s No. 10, and No. 16, worn by centre and former team president Trevor Linden.