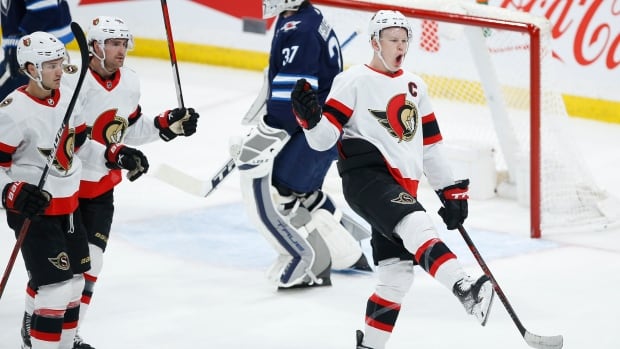 The Ottawa Senators scored a trio of third-period goals in just over three minutes to clinch a 5-2 victory over the Winnipeg Jets on Thursday in Winnipeg.

Captain Brady Tkachuk recorded a pair of goals for Ottawa (23-36-5), which had lost five of six games heading into the match. Tim Stutzle and Michael Del Zotto each picked up a pair of assists.

Josh Morrissey and Kyle Connor, with his 40th goal of the season, scored for the Jets (30-25-10), who ended a two-game win streak.

Connor Hellebuyck stopped 28 of the 32 shots he faced in his 55th game of the season.

The loss didn’t help Winnipeg’s quest to grab the second wild-card spot in the Western Conference. The team sits at 70 points.

The Dallas Stars kept their hold on the second spot with 75 points after defeating the Carolina Hurricanes 4-3 in a shootout Thursday. The Vegas Golden Knights had 72 points before hosting the Nashville Predators (78 points) in a late game.

Winnipeg and Ottawa both scored in the first period.

Morrissey recorded his 10th of the season with play Forsberg would probably take back.

Morrissey appeared to be passing the puck across the front of the net to Blake Wheeler, but Forsberg got his pad on it and it went under him at 8:38.

Tkachuk tied it up at 14:03 after deflecting in Artem Zub’s point shot.

After neither team found the back of the net in the second, Ottawa stepped on the gas.

The barrage of third-period goals started with Tyler Ennis breaking the 1-1 tie on a two-on-one with Mathieu Joseph with 7:35 left in the third.

Connor put in his 40th goal at 17:06, extending his point streak to nine games with seven goals and 11 assists.

Tkachuk added his empty-netter at 18:44.

The Jets host the Columbus Blue Jackets on Friday. The Senators are home to the Florida Panthers Saturday night.