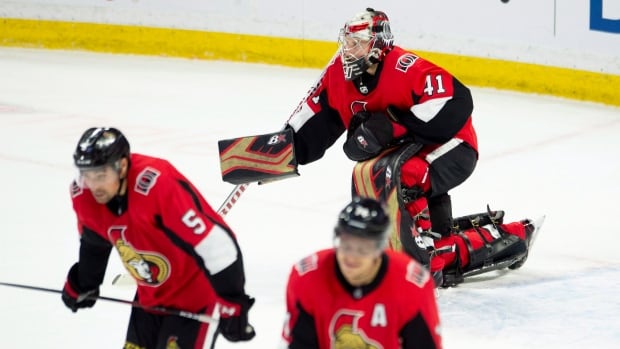 Yanni Gourde scored in overtime for the Tampa Bay Lightning as they pulled out a 4-3 comeback victory over the Ottawa Senators on Sunday night at the Canadian Tire Centre.

Bobby Ryan, Maxime Lajoie and Cody Ceci scored for the Senators (5-6-2), who were coming off an embarrassing 9-2 loss to the Buffalo Sabres on Saturday afternoon.

Craig Anderson bounced back to make 41 saves after giving up three goals on ten shots and getting pulled against Buffalo.

Cedric Paquette, Mathieu Joseph and Brayden Point also scored for the Lightning (10-3-1), while Louis Domingue stopped 22 shots for the victory.

Ottawa led 2-1 going into the third, but Tampa tied the game at 3:04 in the period as Joseph scored his first career goal. Anthony Cirelli spotted Joseph and he made no mistake, beating Anderson far side.

Anderson kept the Senators in the game as the Lightning outshot Ottawa 10-1 through the first ten minutes of the final frame.

Ottawa regained the lead late in the third on a delayed penalty call as Chris Tierney found Ceci all alone in front.

But Point was able to tie the game with 26 seconds remaining in regulation with a two-man advantage. Senators defenceman Mark Borowiecki whiffed on a chance to clear the puck and Tyler Johnson found Point at the side of the net.

Trailing 2-0, the Lightning got on the board early in the second as Paquette scored 38 seconds into the period, jumping on a rebound in the crease.

Ottawa leaped out to a 2-0 lead on power-play goals by Ryan and Lajoie, who tied Ryan Dzingel for the team lead with five goals.

Borowiecki was making his to the Senators’ lineup after serving a three-game suspension for a hit to the head on Vegas Golden Knights forward Cody Eakin.