You had a sense heading in to this year’s Ottawa Senators charity golf tournament that it wouldn’t be like any of the others held in the past quarter century.

Too much had gone on this offseason, capped off by a video message sent to the fans by owner Eugene Melnyk Monday night in which he predicted four-fifths of the team would be gone over the next two seasons.

It was under those circumstances that players gathered Wednesday at the Royal Ottawa Golf Club, which coincidentally or not is where team captain Erik Karlsson is a member.

The annual tournament, held the day before the start of training camp, traditionally marks the end of summer for the players and the beginning of preparations for the new season.

Karlsson was once again the centre of attention on Wednesday. He wasn’t mentioned in Melnyk’s rant on Monday, but it’s widely expected the all-star defenceman, heading into the final year of his contract, will be traded to make room for the youth movement.

He arrived in a grey Porsche, pulling into a prime parking spot right next to the clubhouse while the rest of his teammates were relegated to a lot at the back of the course.

Karlsson smiled warmly as he walked past the cameras clicking away, but didn’t make himself available for interviews.

That will have to wait until Thursday when the team reports to the Canadian Tire Centre for team physicals ahead of the start of training camp. 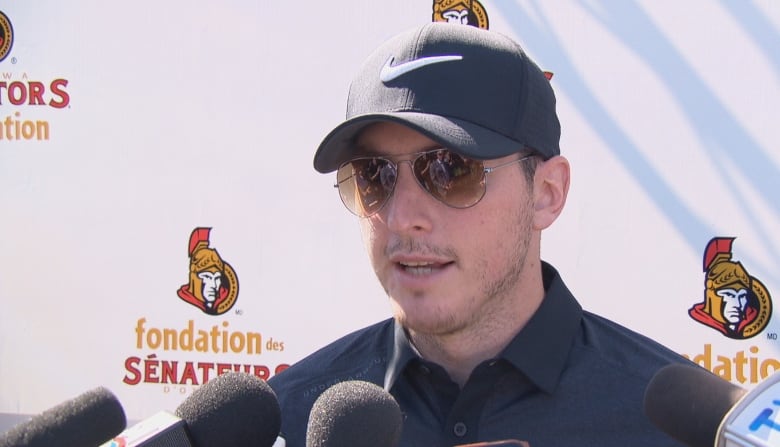 ‘We believe in our group’

While their captain worked on his putting stroke, many of his teammates did speak to the media and almost universally downplayed the circus that has encircled the club over the past six months.

We only concern ourselves with things we can control.– Goaltender Craig Anderson

Forward Matt Duchene said he thinks the team will be fine and will surprise people this year.

“Our team hasn’t changed that much. You know, this was a team that came in last year and was expected to do big things,” Duchene said.

“Obviously, expectations are low from the outside. But we want to have a bounce-back year, and we believe in our group.”

Defenceman Mark Borowiecki, who conducted the interview with Melnyk, said he did so simply to get a message out to fans. He said he’d taken a lot of heat on social media for being involved but had no regrets.

Ottawa Senators defenceman Mark Borowiecki explains why he agreed to take part in a controversial video conversation, in which team owner Eugene Melnyk discussed the future of the team. 0:42

“I did it knowing full well that there’d be backlash. But it’s part of being an adult sometimes,” Borowiecki said.

“Fans deserve to know the plan. Setting the forum aside, the message was really the important thing there. And again, I’m a big boy; [if] people want to hide behind a computer or user name and give it to me, fair enough.”

Goaltender Craig Anderson, who reportedly asked to be traded earlier this year, said he’s “excited to be back and anxious to see what this young group can do.”

Anderson said he doesn’t think Karlsson’s uncertain future would be a distraction, saying that “we only concern ourselves with things we can control.”