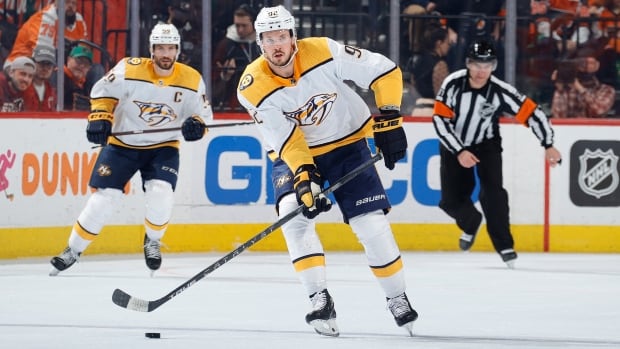 Roman Josi had a goal and two assists as the Nashville Predators erased a one-goal deficit in the third period and defeated the Ottawa Senators 3-2 Thursday in Ottawa.

Ryan Johansen scored the winning goal on the power play at 12:38 of the third period, but it didn’t come without controversy. Josi’s point shot looked to be knocked down by a high Matt Duchesne stick before Johansen tapped the puck in.

The play went under review but the goal stood.

Duchesne had the other goal for Nashville (41-25-4) who got a 28-save performance form Juuse Saros.

Mathieu Joseph and Josh Norris scored the goals for the Senators (26-38-6) who had their three-game winning streak snapped. Anton Forsberg made 31 saves in the loss.

Norris gave the Senators their first lead of the game at 4:36 of the third period as his pass attempt hit Josi’s skate, came right back to him and then he beat Saros for a 2-1 lead.

The lead, and the frustration for Josi, didn’t last long as the Predators captain blasted a shot from 10-feet inside the blue line that Tanner Jeannot was credit for tipping in past Forsberg at 7:48 to tie the game at 2-2.

There was a lot going on through two periods Thursday. A lot of energy, a lot of scoring opportunities, a lot of animosity. What there wasn’t a lot of, though, was finishing.

Through 40 minutes there were 81 shot attempts, 42 hits, 32 penalty minutes but just two goals. That despite the fact the Senators missed back-to-back break away opportunities in the second period and a minute and 16 seconds of five-on-three spanning the final 30 seconds of the first period and into the second period.

The lone goal of the first came on a slow moving two-on-one that saw Duchesne slip a crease-crease pass from Mikael Granlund past Forsberg at 8:32 giving the Predators a 1-0 lead.

In the second period Austin Watson was stopped by Saros on one breakaway and Alex Formenton missed the net on another. The Senators finally got on the board as Joseph scored on an incredible breakaway pass from Erik Brannstrom.

From the top of the faceoff circle in his own end, Brannstrom hit Joseph in stride crossing over the Predators blue line and Joseph beat Saros at 15:32 to tie the game 1-1.