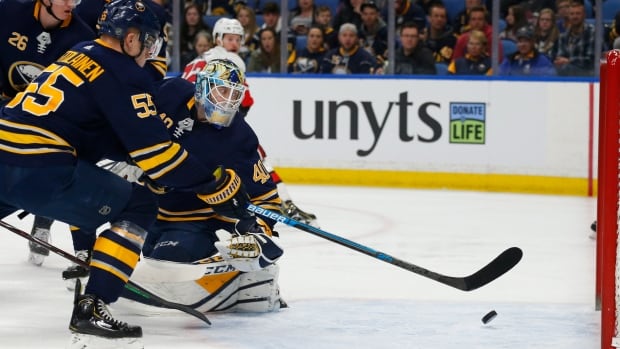 Jack Eichel scored a goal and added two assists, and the Buffalo Sabres closed their home schedule by snapping an eight-game skid with a 5-2 win over the Ottawa Senators on Thursday night.

Sam Reinhart and Kyle Okposo scored 2:14 apart in the second period to erase a 2-1 deficit in a game between two non-playoff contenders. Rookie Victor Olofsson had a goal and assist, and 36-year-old Jason Pominville earned a rousing cheer from the crowd after scoring in what could have been his final home game for the Sabres.

Buffalo won for just the second time in 17 games by improving to 2-13-2, and won in regulation for the first time since a 5-2 victory over Washington on Feb. 23.

Anthony Duclair and Jean-Gabriel Pageau scored the Senators, who were already assured of finishing last in the overall standings. Ottawa closed its road schedule with an 11-28-2 record to mark the franchise’s fewest wins since going 10-31 in 1995-96.

The 22-year-old got the start three days after signing a two-year entry level contract and after he helped Arizona State make its first NCAA Tournament appearance this season. The Sun Devils’ season ended with 2-1 loss to Quinnipiac in the first round Saturday.

Okposo tied it at 2 at the 6:12 mark of the second period when Conor Sheary’s shot from the left circle struck the skate of Ottawa defenceman Christian Jaros. The puck caromed directly to Okposo, who shot it into the open right side 6:12 into the period.

Reinhart scored a little over two minutes later. Jack Eichel chased down a loose puck at the end boards and made a no-look backhand pass in front to Reinhart, whose one-timer beat Daccord on the glove side.

The 3-2 lead was Buffalo’s first in seven games, since Reinhart scored the opening goal in the first period of a 7-4 loss at Montreal on March 23.

Pominville capped the Sabres’ “Fan Appreciation Night” by putting Buffalo up 5-2 with 7:03 remaining. He scored after intercepting Daccord’s clearing attempt at the right boards and firing in a shot inside the right post before the goalie could get back into position.

The goal came after Pominville grew emotional and had to cut short an interview earlier in the day when discussing the realization this game might be his last in Buffalo. He’s completing the final year of his contract in what is his second stint with the Sabres. Pominville spent his first seven seasons in Buffalo before being traded to Minnesota, and then reacquired in by the Sabres in a trade with the Wild two years ago.

The goal was also Pominville’s 217th with the Sabres, moving him into 10th place on the franchise list — one ahead of Don Luce.