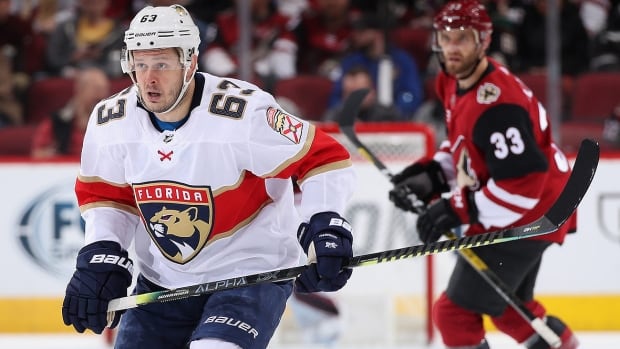 Evgenii Dadonov sees a bright future in the nation’s capital.

And the veteran winger, immediately the second oldest player on the Ottawa Senators after signing, wanted to be a part of it.

Dadonov inked a three-year, $15-million US deal with the club in free agency last week following three seasons of at least 25 goals with the Florida Panthers.

“I’m really excited to play for this team,” he said on a video conference call with reporters Monday. “It wasn’t a decision just made because of the contract.

“[They] told me the plan, the strategy of the team,” Dadonov said. “The team’s got a lot of young guns — very good prospects.”

Now also the second-highest paid forward on the Senators, he pointed to Tkachuk and Chabot specifically on roster looking to turn the corner after putting up the NHL’s second-worst combined record over the last three seasons.

“They have a chance to be superstars in the league,” Dadonov said. “I hope this team’s going to get some success.”

The native of Chelyabinsk knows a bit about that, at least on a personal level.

He registered back-to-back 28-goal campaigns in 2017-18 and 2018-19 with Florida following five seasons in the Kontinental Hockey League, and was on pace to hit 30 for the first time in his career in 2019-20 before the COVID-19 pandemic forced the NHL to suspend its schedule in March.

Dadonov finished with 25 goals and 47 points in 69 games last season, and found the back of the opposition net a career-best 11 times on the power play.

In his 225 games since returning to the NHL, he’s tied for 18th among wingers with 81 goals.

“I’ve been working,” said Dadonov, who shoots left and plays on the right side. “I try to be better defensively offensively, faster, stronger.

“I try and prove myself everywhere.”

Given the nickname “Daddy” by former Panthers head coach Bob Boughner, he could find himself as a mentor on a club in the midst of a rebuild that remains largely short on experience despite off-season trades for goalie Matt Murray, defencemen Erik Gudbranson and Josh Brown, and winger Austin Watson.

“I’m going to get a good role on the team … not a lot of veterans,” Dadonov said. “It’s kind of a step up for me as well … one of the most experienced guys on the team.”

I’ll try to help the young guys. I hope I play a lot of minutes, power play. We want to be a playoff team.— Forward Evgenii Dadonov on joining Senators

He called some of Ottawa’s other Russian players, including 32-year-old elder statesman Artem Anisimov, about the club before signing on the dotted line.

The five-foot-11, 185-pound Dadonov has also skated with Senators prospect and fellow Chelyabinsk product Vitaly Abramov in the summer, and worked with current Ottawa associate coach Jack Capuano for two seasons in Florida.

‘I wanted to test the market’

“I want to help the team win,” said Dadonov, who spoke with five or six other clubs before choosing the Senators. “I’ll try to help the young guys. I hope I play a lot of minutes, power play and just hoping to get successful seasons.

“We want to be a playoff team.”

Dadonov added that the financial uncertainty brought on by the pandemic and the flat salary cap of $81.5 million didn’t weigh on him, even though he didn’t sign for a week after free agency opened Oct. 9.

“I wasn’t nervous at all,” Dadonov said. “I wanted to test the market.”

Originally selected by Florida in the third round of the 2007 NHL draft, he moved between the Panthers and their American Hockey League affiliate over his first three seasons in North America. Dadonov was traded to the Carolina Hurricanes during the 2011-12 campaign, but never played for the NHL club.

He returned to Russia in 2012-13, spending two seasons with Donbass HC and three with St. Petersburg SKA. Dadonov had 30 goals and 66 points over 53 games in his final campaign with St. Petersburg before rejoining the Panthers on a three-year contract worth $12 million in July 2017.

“I love playing hockey,” Dadonov said. “It doesn’t matter where is it – Canada or Florida or Russia.”