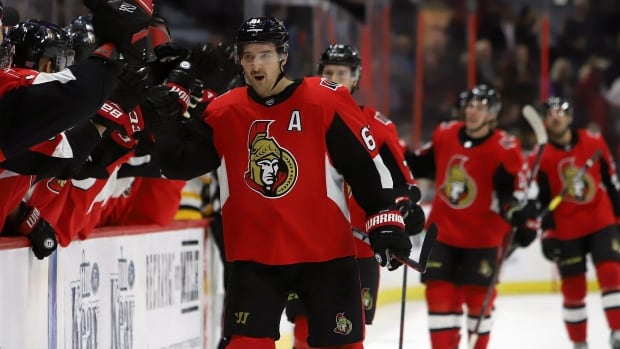 Mark Stone and Matt Duchene had two goals apiece to lead the Ottawa Senators to a 6-4 win over the struggling Pittsburgh Penguins Saturday night.

Brady Tkachuk and Cody Ceci also scored for the Senators (9-8-3), who won their second straight game. Craig Anderson made 31 saves while Duchene tacked on an assists for a three-point night.

Kris Letang, Zach Aston-Reese, Matt Cullen and Patric Hornqvist scored for the Penguins (7-8-3), who are now 1-7-1 in their last nine games. Matt Murray played just one period after allowing three goals on 10 shots. Casey DeSmith gave up three goals on 15 shots in relief.

The Penguins were playing without captain Sidney Crosby, who missed his second straight game with an upper-body injury to the disappointment of the 17,692 at Canadian Tire Centre.

After struggling through the first two periods and finding themselves down four goals, the Penguins were able to score early in the third when Aston-Reese produced his first of the season, and shortly after Cullen jumped on a loose puck to cut the Senators lead to 5-3.

The comeback effort was short lived as Drake Batherson fed Duchene, who broke in alone and beat DeSmith through the legs to make it 6-3.

With just under four minutes remaining the Penguins pulled DeSmith and were able to take advantage as Hornqvist tipped a Phil Kessel shot past Anderson.

Trailing 3-1 the Penguins started the second with DeSmith in goal, but he didn’t fare much better as the Senators scored twice more.

Stone picked up his second of the night on a short-handed breakaway as he picked off an Olli Maatta pass. Less than a minute later Ceci took a pass from Duchene and fired a wrist shot to make it 5-1.

With an assist on the play Duchene picked up his 500th NHL point.

Ottawa jumped out to a 3-1 first-period lead.

The Penguins opened the scoring with a power-play goal as Letang fired a shot through traffic, but less than three minutes later Ottawa tied the game when Tkachuk buried a Colin White rebound into a wide-open net.

Ottawa took the lead as Stone tipped a Thomas Chabot slapshot and Duchene made it 3-1 with under two minutes remaining in the period.