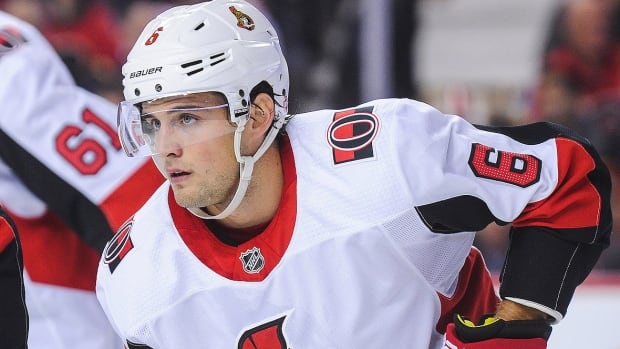 The Ottawa Senators and defenceman Chris Wideman have agreed to terms on a one-year contract extension.

The team announced the deal, which will carry an annual value of $1 million US for the 2018-19 season, in a news release Sunday morning.

We felt that he was trending to become the active, puck-moving defenceman that will complement our style of play.— Senators GM Pierre Dorion on defenceman Chris Wideman’s play prior to his hamstring tear on Nov. 16

Wideman, 28, had three goals and five assists in 16 games during the 2017-18 season. He was scheduled to become an unrestricted free agent on July 1.

He suffered a torn hamstring during a game against the Pittsburgh Penguins on Nov. 16 and required season-ending surgery.

“We’re happy to have Chris back for next season,” said general manager Pierre Dorion. “We felt that last year he was trending to become the active, puck-moving defenceman that will complement our style of play.

“We certainly missed Chris after his injury and he has since been cleared to resume full athletic competition with no restrictions. He’s having a great summer of training and we know he’s excited to get to Ottawa for training camp.”

Wideman has 14 goals and 24 assists in 156 NHL regular-season games, all with Ottawa. He has a goal and three assists in 15 playoff games.

Wideman was the Senators’ fourth-round selection (100th overall) in the 2009 NHL draft.