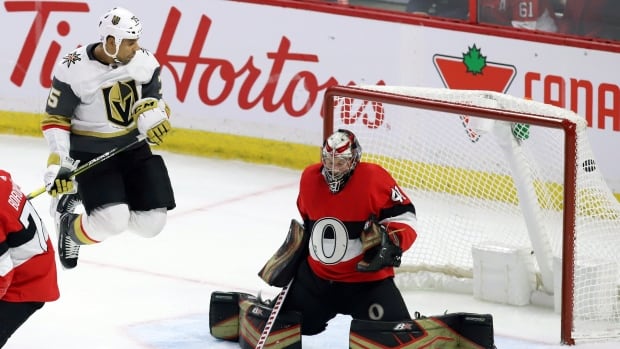 Pierre-Edouard Bellemare had a goal an assist to help the Vegas Golden Knights withstand a third-period comeback to beat the Ottawa Senators 5-3 on Thursday night.

William Carrier had the eventual winner 9:16 into the third, with Bellemare earning an assist on the play, as Marc-Andre Fleury stopped 25 shots.

Matt Duchene, Ryan Dzingel and Thomas Chabot each had a goal as the Senators (6-7-3) tied it 3-3, while Craig Anderson had a busy night making 37 saves.

Thursday’s game featured the return of Senators rookie Brady Tkachuk, who had missed the last nine games with a torn ligament in his left leg.

Trailing 3-1 to start the third, Ottawa tied the game scoring twice in a span of 64 seconds. Dzingel made it 3-2 and right after Chabot had a wide-open net as Fleury was caught sprawling.