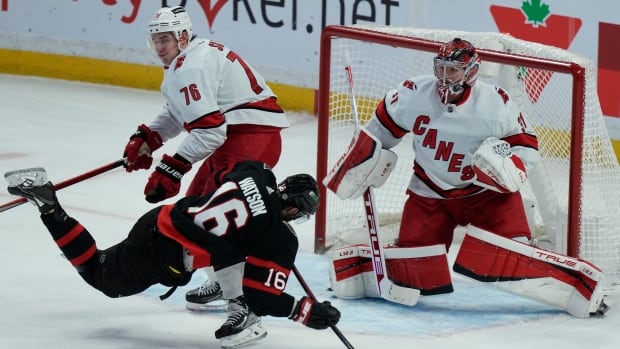 Andrei Svechnikov produced the only goal in the shootout as the Carolina Hurricanes defeated the host Ottawa Senators 3-2 on Thursday night.

It was the first shootout of the season for the Hurricanes, and they secured the victory when Frederik Andersen denied all three of Ottawa’s attempts in the tie-breaking session.

Derek Stepan and Nino Niederreiter scored in regulation for the Hurricanes, who took a 3-2 home loss to Ottawa in December.

Andersen made 37 saves through regulation and overtime.

Nick Paul and Alex Formenton scored for Ottawa. Matt Murray stopped 27 shots before thwarting Vincent Trocheck on Carolina’s first attempt in the shootout. Svechnikov took the second try for the Hurricanes and buried the shot, and Carolina didn’t need a third round.

Andersen stopped Brady Tkachuk’s breakaway chance with about 1:30 left in overtime. After that, the Senators were on a power play for the last 49.8 seconds of overtime.

Freddie slammed the door when we needed it most 💪 <a href=”https://t.co/9NkI0qPgqB”>pic.twitter.com/9NkI0qPgqB</a>

Niederreiter tied the score with 3:22 to play in regulation. It was his 13th goal of the season but only his third in a road game.

Formenton had put the Senators on top 2-1 with a tally 5:51 into the third period.

Stepan and Paul scored within a two-minute span early in the second period. It was Stepan’s sixth goal of the season, with two of them coming across the past five outings.

By the end of the second period, the Senators had applied all sorts of pressure. Ottawa posted a 20-6 edge in shots in the middle period after Carolina’s 15-7 shot advantage in the opening period. The Hurricanes went 0-for-2 on power plays in the first period.

Carolina managed a total of 13 shots across the second and third periods.

The Senators fell to 1-0-1 midway through a four-game homestand. Murray shut out the Buffalo Sabres on Tuesday.

Ottawa played without All-Star selection Drake Batherson, who broke his left ankle against Buffalo and will be out for at least several weeks.