Dorion spoke to reporters a day before the NHL draft with the Senators reeling from several public relations disasters, including the alleged cyberbullying of captain Erik Karlsson’s wife by Hoffman’s fiancée.

Hoffman, who has broken the 20-goal plateau in each of the last four seasons, was traded to the San Jose Sharks on Tuesday. San Jose then flipped him to Florida, Ottawa’s Atlantic Division rival.

News broke last week that Melinda Karlsson filed a peace bond in May alleging Monika Caryk posted hundreds of derogatory and harassing online messages aimed at her and her husband.

Hoffman and Caryk have denied the allegations and have not been charged in relation to the incident.

“No rooms in the NHL are perfect,” Dorion said. “I think we’ve all been around for a long time and we understand that those 23 guys, at times they’re like brothers. They get on each other’s nerves, but this wasn’t an indictment on Mike Hoffman. This was just the direction that we needed to go.”

Dorion said management “heard a rumour” about the situation between Karlsson and Hoffman at the end of the season.

“If we acted on every rumour we hear, we couldn’t do our job in management as a general manager.” Dorion said. “No player ever came to us about these things.”

Winger Mikkel Boedker is the key piece coming to Ottawa from the Hoffman deal.

“We feel Mikkel Boedker is a good player, he had a great second half, he was San Jose’s fifth-leading scorer in their two rounds in the playoffs,” Dorion said. “We know with the culture that we’re aiming to get, that he’s going to fit in that dressing room.”

The rift between the Karlssons and Hoffman and Caryk was just one of several recent eyesores for the Senators, who are at the draft without suspended assistant general manager Randy Lee.

Lee was charged with harassment after an incident at a pre-draft combine in Buffalo. He has pleaded not guilty to the charge. 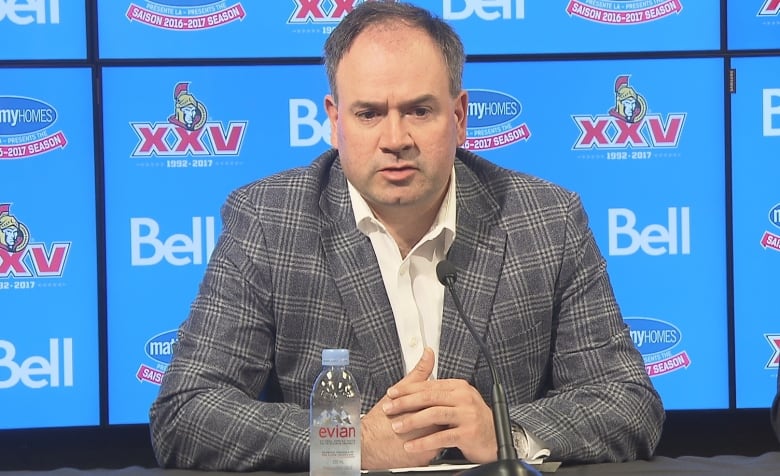 Pierre Dorion said during a press conference in Dallas that the team had no choice, but to trade Mike Hoffman to correct problems in the dressing room. (CBC)

Other negative headlines about the Senators have piled up in the past year — quite a turnaround from the spring of 2017 when Ottawa was one goal away from reaching the Stanley Cup final, losing in double overtime of Game 7 against the Pittsburgh Penguins in the third round of the playoffs.

Just before the Lee and Karlsson-Hoffman story broke, Daniel Alfredsson was quoted as saying he hopes the team is sold to ensure its future in the nation’s capital.

Meanwhile, a baby garment featuring the Senators logo was recalled because of a potential choking hazard.

Prior to a showcase outdoor game last December in Ottawa, things also turned ugly for the franchise. Former Ottawa centre Kyle Turris, who was traded to the Nashville Predators in a three-way deal the previous month, told The Canadian Press that Melnyk was the reason he was no longer with the Senators.

Then, on the eve of the outdoor game, Melnyk hinted he might have to move the franchise if lagging ticket sales didn’t improve. Later, #MelnykOut was launched on Twitter, eventually spreading to billboards across the city.