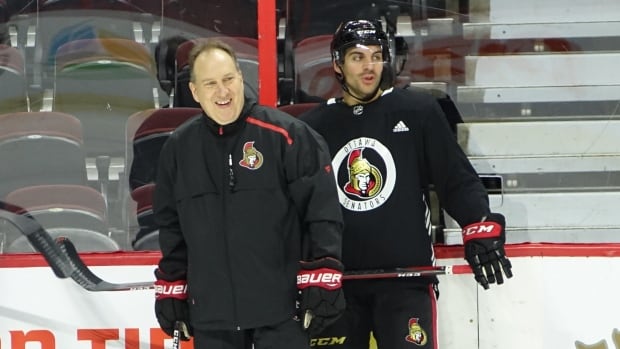 Ottawa Senators veterans say the team has dealt with the players who were caught on video complaining about their team and coach to a cabbie and they’re ready to move on.

Seven Senators players apologized late Monday night after Postmedia published a story with a video of them criticizing their team and coach Martin Raymond in a conversation with an Uber driver in Phoenix, Ariz., last week.

Seven Ottawa Senators players are apologizing after a video surfaced of them trash-talking and ridiculing their assistant coach. Postmedia found the video on social media and re-posted it. 4:18

None of those players spoke to the media after morning skate Tuesday.

Instead, it was up to long-time Senators such as Mark Stone and Craig Anderson to face the first questions about the incident from reporters.

“This is a hiccup,” Stone said, adding the team found out about the existence of the video a few days ago. “Guys have made great efforts to repair relationships. This is only going to make our team stronger.”

“[The players] support each other,” Anderson said.

Head coach Guy Boucher said the team has dealt with the issue and has moved on.

An Arizona media law expert said in an email there are a few legal questions at play.

He said there are arguments at least one person involved (the driver) knew about the recording, which could meet one legal threshold.

Other factors include whether there was a reasonable expectation of privacy given they were in a ride-hailing vehicle and whether the information shared is of the public interest.

An Uber general manager said filming a private conversation without passenger consent is a clear violation of its terms of service.

Uber worked to get the video removed, said a spokesperson in an email, without addressing question’s about Uber’s camera rules in Phoenix and whether the driver is facing discipline.