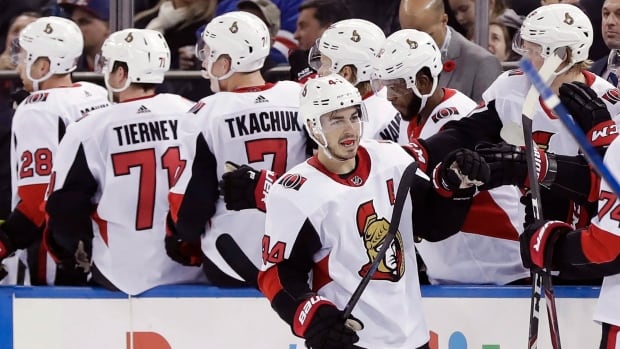 Rookie Kaapo Kakko opened the scoring for the Rangers with his third goal at 8:47 of the first period. Kakko accepted a pass from defenseman Adam Fox before backhanding the puck past Nilsson. Brendan Lemieux also assisted.

Pageau tied the contest at 14:56 of the first, assisted by former Ranger Anthony Duclair.

Ennis put Ottawa ahead with a power-play goal at 18:31 while the Senators were on a 5-on-3 advantage. Thomas Chabot and Namestnikov assisted on Ennis’ third. It was only the third power-play goal of the season for Ottawa, which entered the contest 2 for 42 with a man-advantage.

But the fisticuffs did little to inspire the Rangers, who didn’t exhibit the same zip displayed in their two most recent games, solid wins over Tampa Bay and Nashville. It was a clear case of the Rangers playing down to their opponent, as Ottawa entered the contest with a league-worst seven points in 12 games.

The Senators outshot the Rangers 14-11 in the first period. The Rangers had a 12-11 advantage in the second, but the Senators scored three times against Georgiev.

Hainey, the 38-year-old defenseman, made it 3-1 with his first of the season at 4:12, one second after a hooking penalty to Rangers defenseman Jacob Trouba expired.

Pageau, who had a four-goal playoff performance against the Rangers in 2017, netted his second goal of the contest and fifth of the season on a breakaway at 11:43 of the middle period. Brady Tkachuk made it 5-1 for the Senators with his fourth at 14:56.

Artemi Panarin cut the deficit to 5-2 with a power-play goal for the Rangers at 17:34 of the second, with assists to Kakko and DeAngelo. Panarin extended his points streak to five games with his team-best sixth goal of the season.

Namestnikov then made it 6-2 for Ottawa with another power-play goal at 5:35 of the third. The 26-year-old Russian forward has five goals and four assists in 11 games with Ottawa since his trade from the Rangers on Oct. 7. He scored 13 goals in 99 games with the Rangers.