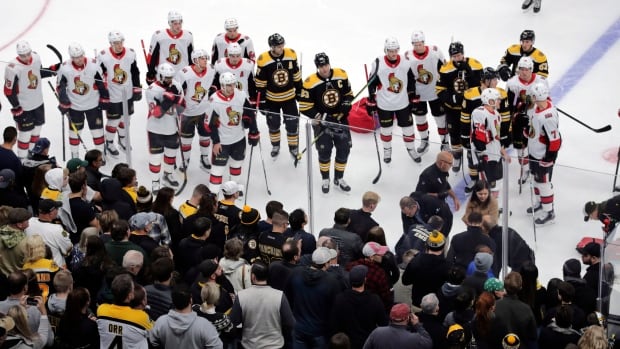 Ottawa forward Scott Sabourin has been taken from the ice on a stretcher with his head immobilized after a collision with Boston forward David Backes early in the first period of Saturday night’s game between the Senators and Bruins.

Sabourin skated up to make a hit on Backes when the players’ helmets collided. Sabourin immediately feel to the ice, appearing to be unconscious, and he lay motionless for a brief period.

Medical staff from both teams rushed to Sabourin, and a Bruins’ trainer quickly signalled for a stretcher. There was a large blood spot on the ice under Sabourin’s face.

TV cameras showed Backes visibly upset, looking as if he was fighting back tears, as he watched medical personnel attend to Sabourin. An Ottawa player could be seen consoling Backes, putting his glove on his shoulder.

Fans gave Sabourin a loud ovation when he was taken from the ice. Backes went to the dressing room after Sabourin was wheeled off.

According to the broadcast, Sabourin was awake and moving his extremities.

Backes also left the game with a reported upper-body injury.