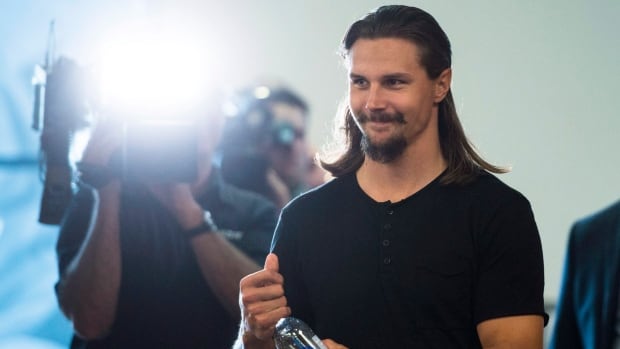 Getting a healthy Joe Thornton back on the ice was supposed to be the biggest change when the San Jose Sharks began training camp this season.

That all changed when general manager Doug Wilson made a blockbuster trade to acquire two-time Norris Trophy winning defenceman Erik Karlsson, immediately turning the Sharks from a contender to one of the favourites in the Western Conference.

“Clearly we want to win now and I think everybody is excited in this room,” Thornton said. “Our fans are very excited. I think it’s a real good time to be a Sharks fan. But we have to keep it day by day, keep the focus in on short periods of time and I think if we do that we have a good shot this year.”

The Sharks opened training camp Friday with a healthy Thornton on the ice after having recovered from a second major knee surgery in the past two years. Karlsson has not yet arrived from Ottawa as he works out visa issues that could keep him from joining his new team until next week.

But the trade is already providing an emotional boost to start the season.

“It definitely ramps up when you make a trade like that,” forward Logan Couture said. “Obviously you’re excited when you come back to start the season. It’s the same type of energy every year. But things get shaken up when you make a big deal.”

Karlsson and Burns are the two highest-scoring defencemen in the NHL since the 2008-09 season and the first pair of Norris winners to play together since Chris Chelios and Nicklas Lidstrom did it in Detroit and Scott Niedermayer and Chris Pronger in Anaheim in 2008-09.

Watch how fans reacted to the Karlsson trade:

“We were good to begin with and now we’re even better,” Vlasic said.

Some of the success will depend on the play of Thornton at age 39. He signed a one-year, $5 million US contract in July, taking a $3 million pay cut from the previous year to help make sure the Sharks have the room to add other top players. That happened Thursday with the deal for Karlsson from Ottawa.

The Sharks didn’t have to give up any top-end NHL talent in the trade but did lose third-line centre Chris Tierney. That leaves Logan Couture and Thornton as the only proven centres on the roster, putting perhaps an even bigger load on Thornton.

Thornton went down with a season-ending right knee injury Jan. 23. Thornton had torn the ACL and MCL in his left knee late in the previous season but the earlier timing of this injury has him in better shape to start the season.

“Night and day,” DeBoer said. “And that’s good. That’s just time. If you asked me where he is today compared to a year ago, his first day at camp, there’s no comparison to that. Again, we’ve got to be cautiously optimistic because he’s had two surgeries, but he looks real good.”

Thornton started slowly last season as he worked his way back but was near his top form by the end of November. He had 11 goals and 15 assists in his final 28 games before the injury.

Thornton has been the face of the franchise in San Jose since arriving in 2005, helping the team reach three Western Conference finals and one trip to the Stanley Cup Final in 2016.

Because of the injury, Thornton never got the chance to play with last year’s big acquisition in forward Evander Kane. Thornton began camp centering a line with Kane and captain Joe Pavelski in what likely will be a combination to start the season.

“Joe’s obviously a legend who’s actively playing, which is rare in this league,” Kane said. “It’s great to see him back on the ice. Looking forward to continuing to kind of build throughout the course of the camp with our line and kind of gear and set a goal to be firing on all cylinders Oct. 3.”