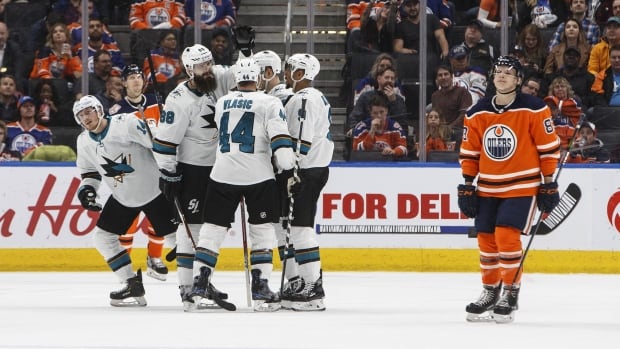 Brent Burns had a goal and an assist as the San Jose Sharks got a bit of relief from a late season funk with a 3-2 victory over the Edmonton Oilers on Thursday.

Marcus Sorensen and Gustav Nyquist also scored for the Sharks (45-27-9), who came into the game with losses in nine of their last 10 as they prepare for a first-round playoff matchup against the Vegas Golden Knights.

Leon Draisaitl had both goals for the Oilers (34-38-9), who have lost five straight and will miss the playoffs for the 12th time in the last 13 seasons.

Draisaitl started the scoring two minutes into the opening period when he stripped a puck while shorthanded and went in to send a backhand shot through the legs of Sharks goalie Aaron Dell.

San Jose tied it up seven minutes later when Joe Thornton sent a pass from behind the net to Sorensen, who beat Oilers goalie Anthony Stolarz. With the assist Thornton passed Steve Yzerman (1,063) for eighth-place on the NHL all-time list in that category.

The Sharks took a 2-1 lead just over a minute after that when Burns scored his 15th of the season high to the glove side from the middle of the faceoff circle.

Nyquist tipped in a Burns point shot to give San Jose a 3-2 lead with 1:12 left in the second period.

Both teams close out regular-season play on Saturday as the Sharks are home to the Colorado Avalanche and the Oilers head to Calgary to face the Flames.