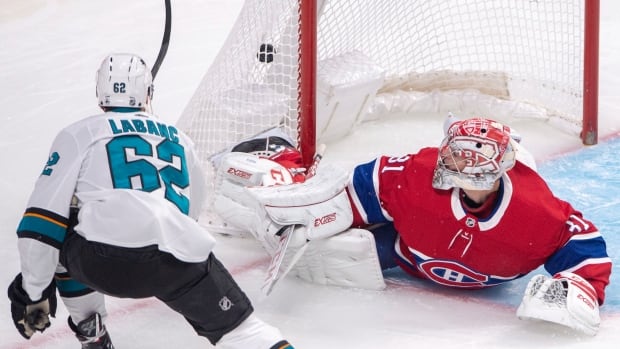 Evander Kane scored twice on the power play as the visiting San Jose Sharks beat the Montreal Canadiens 4-2 on Thursday to snap a two-game losing skid.

Kevin Labanc and Melker Karlsson also scored for the Sharks (4-5-1) in the first game of a back-to-back set. Tomas Hertl had three assists.

Nick Cousins and Joel Armia scored for the Canadiens (4-4-2), who were on three days rest following Sunday’s 4-3 loss in Minnesota.

The Sharks have won nine straight games against the Canadiens dating back to Mar. 21, 2015.

San Jose scored four unanswered goals after Cousins got Montreal on the board at 16:36 of the opening frame with his first in a Canadiens uniform.

The equalizer came three minutes later on the power play when Logan Couture’s shot ricocheted off Kane’s leg and in. The shorthanded Canadiens were scrambling in their own zone and could not get a stick on the puck.

The Sharks made it 2-1, again on the power play, when Hertl poked a loose puck through the crease to Kane at 4:54 of the second period for his sixth of the season.

An unselfish play by Hertl led to San Jose’s third goal at 8:08 of the second when the centreman passed to an open Labanc in the crease instead of shooting.

The 38-year-old Dell kept the visitors in the game with a string of key saves in the second period, most notably stopping all nine shots he faced on a Canadiens power play with Brent Burns in the box.

Karlsson’s first goal of the year, on a smart feed from veteran Joe Thornton along the boards, made it 4-1 with 36 seconds to play in the second.

The Canadiens showed signs of life when they reduced the deficit 22 seconds later on Armia’s tip past Dell. The Finnish winger leads Montreal with five goals after missing the last two games with a lower-body injury.

But that’s all Claude Julien’s offence could muster, with Dell making another seven saves in the third period to improve to 2-1-0 on the season.