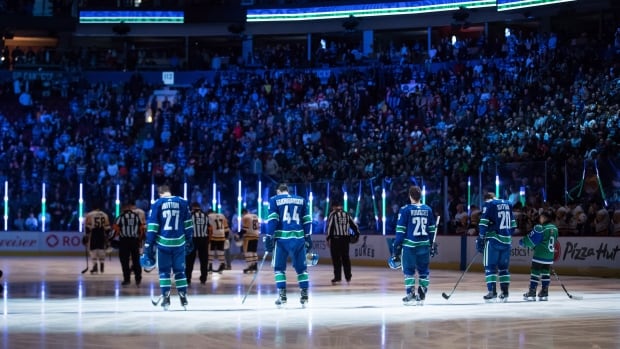 Sidney Crosby says his team is standing with its city after an attack at a synagogue in Pittsburgh left 11 people dead and six others wounded.

Speaking with reporters ahead of a game against the Vancouver Canucks last night, the Pittsburgh Penguins captain and Nova Scotia native says the team’s thoughts and prayers are with the victims and their families.

Ahead of their game against the visiting Pittsburgh Penguins, the Vancouver Canucks held a moment of silence for the 11 people killed in an attack at the Tree of Life Synagogue in Pittsburgh. 0:39

He says the team will “stick together and rally around” those affected.

The mass shooting took place during a baby-naming ceremony at the Tree of Life synagogue in the city’s Squirrel Hill neighbourhood, and American officials said one person — identified as 46-year-old Robert Bowers of Pittsburgh — is in custody.

Bowers appears to have made virulent anti-Semitic posts on a social media platform popular with far-right extremists — including one made shortly before the attack.