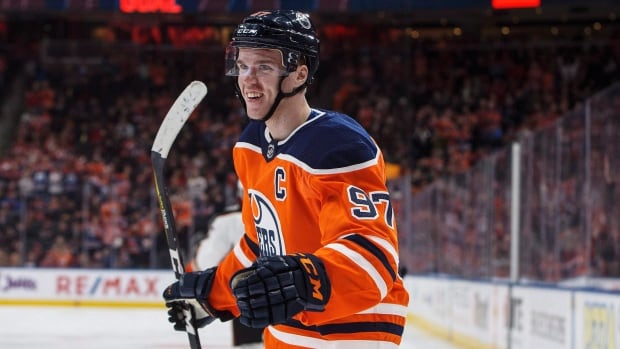 With Connor McDavid and Auston Matthews both off to hot starts to the NHL season, many hockey fans are choosing sides in a familiar debate: who’s the best player in the world?

Watch our video on who has held the “best player” belt over the years:

Most (outside Toronto anyway) seem to favour McDavid, who set an NHL record by either scoring or assisting on each of his team’s first eight goals to start the season. The 21-year-old Edmonton Oilers star has won the league scoring title two years running and took the Hart Trophy as the NHL’s most valuable player in 2016-17.

Matthews, though, is making a strong case for himself. The 21-year-old leads the league in both goals (10) and points (16) and has recorded at least two points in each of the Maple Leafs’ first seven games.

Still, the nod goes to McDavid, according to one very notable expert.

“I think McDavid has set himself apart just based on the awards and the accolades he’s gotten and the consistency he’s had,” Sidney Crosby told NHL.com on Wednesday. “I think it’s fair to say it’s an easy pick just because of that.

“Matthews has emerged this year and it really looks like he’s taken even another step. I think there’s a lot of guys in the conversation. But it’s hard to argue [against McDavid]. He’s been really consistent. He’s won scoring titles, MVPs. So yeah, that’s an easy one to pick.”

Crosby, of course, has enjoyed his own run as the consensus best player in hockey. The 31-year-old Pittsburgh Penguins captain has won three Stanley Cups, back-to-back Conn Smythe trophies as the playoff MVP, along with a pair of Harts. But he said he doesn’t advocate for himself in any “best player” debate.

“[My motivation] is always to be my best,” Crosby said. “That’s allowed me to be in the conversation of the guys who are considered to be the best. I think that’s the way I’ve always looked at it. I’ve always wanted to get the best out of myself. Wherever that puts me, that’s where its put me.”